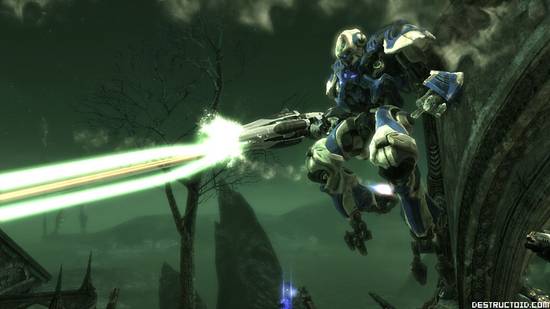 Having found a home on the both the PC and PlayStation 3 late last year, we’ve been hearing promises of Unreal Tournament III coming to the Xbox 360 for quite some time now. Yesterday, Midway and Epic announced that they will finally be shipping the title for Microsoft’s console this summer.

In terms of modes and gameplay, there are no huge changes with the Xbox 360 release. It will still maintain the single-player campaign, as well as Deathmatch, Team Deathmatch, Capture the Flag, and Warfare modes. The game will include two extra characters, each with its own enhanced abilities, as well as five new maps exclusive for the Xbox 360; additionally, all of the previously released downloadable content will also ship on the disc. And there’s good news for people who actually like to be close to human beings – UT III on the Xbox 360 supports split-screen play.

The game was up and running at Midway’s Gamers’ Day, and there’s not too much to report. The game looks good (although not quite as sharp as the PlayStation 3 version) and runs smoothly on the Xbox 360. I do prefer the feel of the Xbox 360 controller, but that’s at the expense of the game lacking keyboard and mouse support. The extra content 360 owners will be getting is nice, but the lack of proper support for user-generated content due to Microsoft’s strict “Anti-Things That Gamers Want” could genuinely hurt this title’s appeal for some. For sure, it’ll only be a matter of days before the community re-creates all five maps and the two extra characters for the PC and PS3.

Modifications aside, UT III shipped as a pretty solid game out of the box, and at the right price point (Midway recently announced price drops for both the PS3 and PC versions of the game) should definitely be worth a look for most fans of twitch-based first-person shooters. Hopefully Xbox 360 gamers will be able to pull themselves away from Call of Duty 4 long enough to give it a go when the game ships later this year.