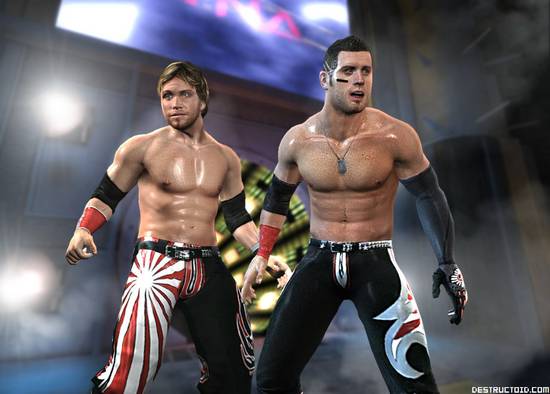 “I can confidently say that Midway LA contains some of the most belligerent, miserable, nasty people that we’ve ever had the pleasure of working with,” joked TNA Impact wrestling superstar, Samoa Joe, as he took the stage at Midway’s Gamers’ Day presentation yesterday.

Having worked closely with Midway since the title was in early development, Joe obviously feels comfortable enough to poke fun. The wrestler — along with other TNA talent – has been integral in the development of the TNA Impact! game from day one, bringing his passion for the art of wrestling and his love of videogames to the title’s production. (Many of the wrestlers, including Joe, will speak openly and confidently about their favorite wrestling titles, which includes games like WWE No Mercy and the cult classic Fire Pro series of games.) Originally slated to hit shelves in spring, the game’s release has been delayed in order to add extra “polish” and fine-tune various gameplay elements.

Since going hands-on with an early version of the game last year, that extra level of polish is already showing. The already gorgeous game (rendered in smooth 60 frames per second by Unreal Engine 3) is looking sharper than ever, with more modes, details, and animations than I saw last year. Hit the jump for details on what looks to be shaping up to be a solid first outing for the TNA franchise. 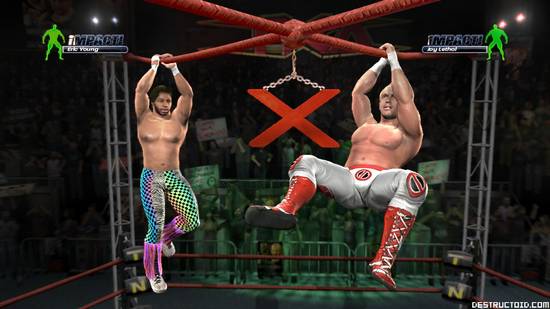 With a little over 20 playable superstars, it’s obvious that Midway knows that they can’t compete head-on with THQ’s Smackdown vs. Raw series, which has piled on layers worth of features year after year. Instead, the game’s producer Sal Divita stresses the focus on a tight, fast gameplay experience that captures the intensity of a live TNA event. Since my last hands-on with the game, the core mechanics of the game haven’t changed significantly, but the game is definitely looking and feeling more fleshed out. For instance, the HUD has been jazzed up a bit, and proper move-sets have been matched to each wrestler.

One noticeable addition was that of something called “style points,” a form of in-game currency which can be used to unlock venues, outfits, different move-sets, etc. Style points are awarded for move variation; performing a suplex on your opponent repeatedly is not only boring to watch, but it won’t help you in the “style points” category, either. This system is in place encourage players to change up their attacks, and provided the player’s are invested in earning more style points to use towards unlockables, should keep matches from quickly getting stale.

This new build of the game also saw the addition of the game’s varying match times, roughly eleven in all, including “Full Metal Mayhem” (chairs, etc.), the “Monsters Ball” battle royal, and more. But the star of the show here is TNA’s signature “Ultimate X” match type, which has wrestlers vying to pull down an “X” which sits high above the center of the game’s octagonal ring. Steel cables criss-cross above the ring, and wrestlers much climb the ropes and shimmy across in order to pull down their prize and win the match. This leads to all sorts of in-ring hilarity and excitement, of course, with wrestlers kicking and pulling each other off the steel cables to the mat below. 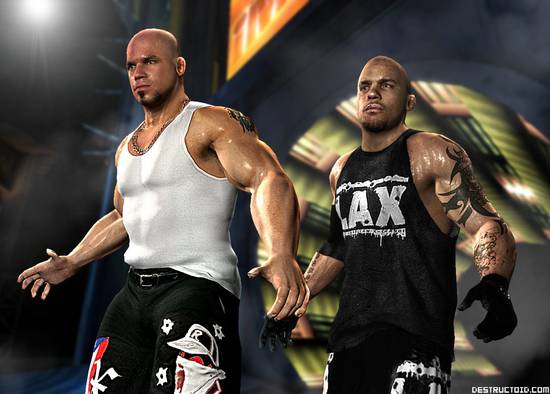 I went head to head against UGO’s Adam Rosenberg in what was one of the most intense videogame wrestling experience I’ve had in awhile, as both of us pounded one another into submission in order to get the upper hand and retrieve the “X.” The game’s new dizzy meter helps open up opportunities to grab your prize. By doing enough damage to your opponent, the meter fills and causes your opponent to become dizzy and incapable of movement. The meter will visibly drain, and once it does your opponent will come to.

Once Adam was stunned, I was able to hop on the turnbuckle with the B button, and then by pressing a “strong modifier” (the Xbox 360’s left shoulder bumper) and B again, I grabbed the steel cable and began to climb hand-over-hand towards the “X.” Once I had reached the center, pressing B again brought up a quickly moving meter that required you to press A to stop it at just the right moment. After a few misses, I finally nailed it, and that’s when Divita broke the bad news – I’d have to do that eight times in order to release the “X.” By this time, Adam was on my tail, crawling across the cables and kicking me down to the mat.

As you’d expect, this goes on for awhile. Sometimes I would reach up and grab Adam’s wrestler’s legs as he climbed above me and slam him down to the ground; sometimes he would be quick enough to pull his legs up to avoid my swipes. As the match dragged on, the intensity increased, with each successive white-knuckled grasp for the “X” inspiring more spectator shrieking and howling. For the record, Destructoid owned UGO on this particular day, but Adam didn’t go down without a fight. 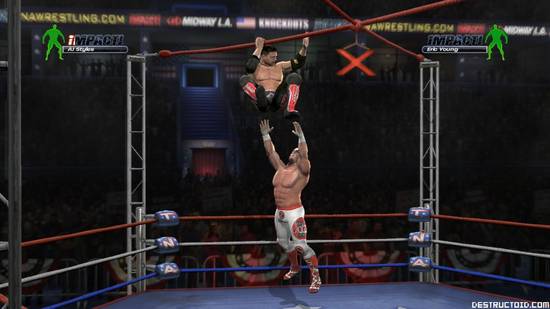 Based on the short hands-on time with the “Ultimate X” match, it seems like it’s going to be a solid, easy to pick up multiplayer experience (imagine also, the “Ultimate X Free for All,” where three wrestlers vie for the dangling trophy). The game is also said to have a deep story mode as well; Divita hesitated to give specifics, but could confirm that it will involved following your created characters career as a professional wrestlers in TNA. He noted the focus on a strong – even emotional – story, one which he thinks hasn’t been seen in wrestling games to date. There was even mention of a “moral” at the game’s end, which Divita promises will not be cheesy in a sitcom way, joking that it’s more in the vein the moral at the end of a South Park episode.

We’ll surely have to wait until September, the game’s new ship target, before we find out what that means. But hopefully the polish we’re seeing as a result of the extra time they’re taking with the game will continue to shine at this year’s E3, when Midway promises to show us more of TNA Impact.