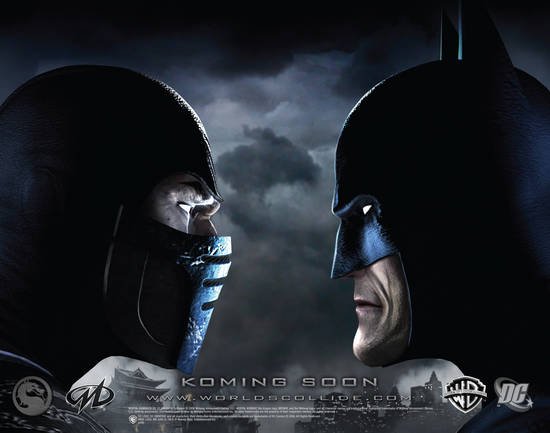 Yesterday, at a Gamers’ Day event that took place in Las Vegas’ remote Red Rock Casino, Resort, and Spa, Midway’s Ed Boon finally pulled the cover off of the next chapter in the Mortal Kombat series.

Called Mortal Kombat vs. DC Universe, the Unreal Engine 3.0-powered title pits characters from Midway’s videogame universe against DC Comics’ iconic super heroes. The details on what brings the two universes together are being kept under wraps, but Midway’s creative team has joined with comic book writing talent Justin Gray (Batman: Legends of the Dark Knight) and Jimmy Palmiotti (Painkiller Jane) to make sense of the peculiar mash-up. Presently, Midway are only confirming Scorpion, Sub-Zero, Superman, and Batman as playable characters in the upcoming title.

“Every console generation we like to wipe the slate clean with Mortal Kombat,” Boon said, “With this generation we’re starting new with both the new fighting engine, and as you can see, the story mode. We’re very excited about the new fighting mechanic that marries the intense brutality of Mortal Kombat with the signature moves from DC characters like Batman and Superman.”

More (though not much) info after the jump.

While the game wasn’t playable, a teaser trailer displayed some of the game’s new fighting mechanics: “Freefall Kombat”, where players can battle in the air while transitioning between areas, and “Klose Kombat,” brutal up-close fighting that will highlight the game’s real-time damage, including torn clothing and bruising. Boon also promised the ability to throw characters off of and through buildings.

One final thing, and I hope you’re sitting down for this one — MK vs. DCU will not feature one of the series’ staples — fatalities. It seems that this signature feature of the Mortal Kombat titles doesn’t sit well with DC Comics’ values. Could we be seeing the first T-rated Mortal Kombat title coming to market? We’ll have to wait until E3, when Midway plans to reveal more details on the title, which is scheduled to ship for the PlayStation 3 and Xbox 360 this fall.