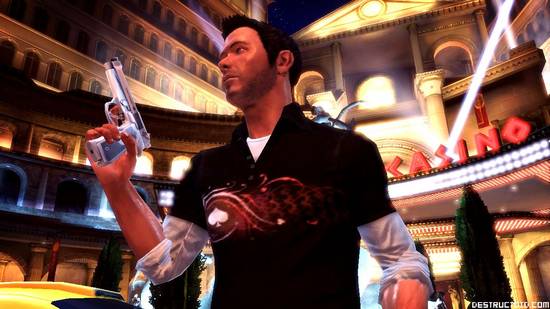 Partying. Gambling. Driving. Fighting. What else is there to do while in Las Vegas? (Don’t answer that.) Seattle-based developer Surreal Software (The Suffering) thinks that that’s all you’ll really need to get immersed in the hyper-realistic world of their upcoming decadent open-world romp for the PlayStation 3 and Xbox 360, This Is Vegas.

When tyrannical fast food mogul Preston Boyer wants to turn Las Vegas into his vision of a family-friendly tourist trap, you have no choice — you have to party harder, race faster, and spray down girls in the occasional wet t-shirt contest. Oh yes, this is the world of This Is Vegas.

Just by watching one of the game’s trailers, the game can easily be (incorrectly) pegged as a “Grand Theft Auto rip-off,” but Surreal seem intent on doing everything they can to differentiate themselves from the pack. Sure, you can hop into (read: steal) cars and race all over the strip. Shooting things? This Is Vegas has that, too. But it also has cage fighting, synchronized dancing, bartending, and gambling. Oh, and wet t-shirts. Did I mention that yet?

Well, if you missed it, I’ll probably mention it again after the jump. 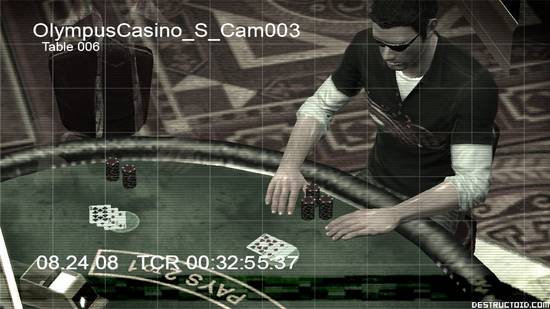 Gambling — I don’t do it. I’m already broke enough as it is, and when it comes to gambling, I’m likely the most unlucky son-of-a-bitch you’ll ever meet. But when it comes to gambling in This Is Vegas, I like the odds. Wandering into any of one the game’s casinos, you’ll have the ability to sit down and throw some chips on a table, or pull the arms of the slots. At Midway’s Gamers’ Day, Surreal was showing off the game’s blackjack game, and more importantly, the way you’ll cheat to beat the house, “Advantage Play.”

Using advantage play, cards that are being dealt will be marked to give you a better idea of what to expect from the next hand. For example, cards that are marked with a hash mark will be between one and six; a card marked with a circle will be between seven and nine; and a card marked with an “X” will be an ace or higher. By using this knowledge to your advantage, you’ll be able to properly assess the situation, and more easily come out on top. Beware — pushing your luck with the dealer will raise his suspicion, and you’ll get thrown out on your ass if you keep it up.

At that point, you may have to resort to fisticuffs, another element of This Is Vegas that we were given the chance to play around with. In the mission we had a chance to demo, it seems that two meathead-like characters are completely pissed that we had apparently wrecked their car. So what did I do? Kicked their asses, of course. By pressing the Y button, I was able to grab a dude-bro; tapping it again had me push them to the ground. Repeatedly tapping X resulted in a flurry of combos, and pressing the left bumper at the right time resulted in a cinematic “buzz bomb,” a slow motion upper-cut that sent them flying through the air. 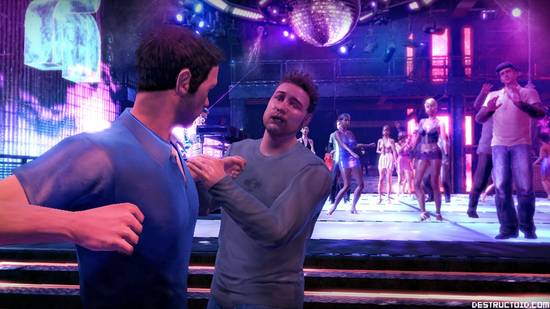 But what’s with all the fighting? Where’s the party around here? And that brings us to This Is Vegas’ most bizarre, and yet most interesting, facet — the parties. In the hands-on demo, I entered a nightclub and was asked by the DJ (a scantily clad raver chick in pigtails) to do whatever I could to get the scene hopping. At this point, the club was kind of dead, with only a few people mingling on the dance floor. By walking onto the dance floor, you automatically enter a dance mini-game, and pressing any button gets things started. By timing your presses right (pressing Y does the running man!) and using a number of combinations (holding right and pressing B does the “Kid & Play”), you’ll successfully “cut a rug” on the dance floor. Doing so earns you points, and the more points you earn at a party, the more happening the scene gets.

Other ways of earning points at parties include bouncing fools out of the club, bartending (a Root Beer Tapper-esque or Diner Dash-like mini-game that has you pressing different colored buttons to fill different partygoer’s needs), and — wait for it — holding a wet t-shirt contest. I didn’t have a chance to go hands-on with any wet, giggling girls (I’m a married man, I’ll have you know), but Surreal’s Alan Patmore showed us a demo during the opening presentation that opened Gamers’ Day, where he sprayed bouncing girls in tight, white t-shirts with soda water from a gun behind the bar. Yes, that actually happened.

That being said, it really does seem as if Surreal have done enough to make them truly unique in the game space. Whether it’s by offering up a wild amount of gameplay variety, or simply striving to be “more Vegas than Vegas,” they certainly might be on to something here. Unfortunately, it’s hard to get an idea of how all of these elements will work together; the demo was broken up in to very distinct chunks, with no open-world gameplay being shown. 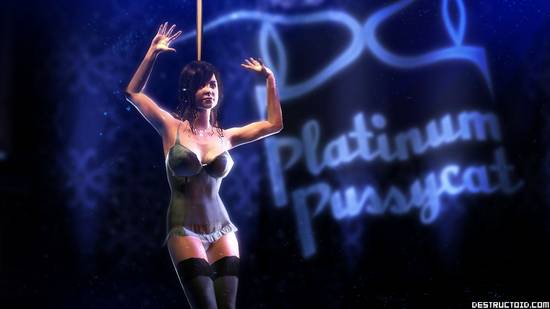 I had expressed concern to the team at Surreal — while I’m intrigued by their The Sims-like partygoing elements, will the same people who sign onto the This Is Vegas train want to also make sure the party is “crunk”? All of the parts seem solid, and Surreal seem confident they can pull off a seamless experience that really captures a lot of those “Vegas moments” that everyone says are supposed to “stay in Vegas.” We’ll be seeing more of This Is Vegas at E3, and maybe then we’ll get a better picture of just how all of this insanity is going to fit together.