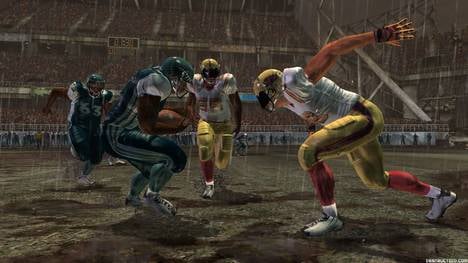 Midway has announced that they’ve signed on comedians Frank Caliendo and Jay Mohr to provide voices for the upcoming over-the-top football release, Blitz: The League II.

Caliendo, best known for his celebrity impressions — including a pretty hilarious and spot-on John Madden — will voice three roles: the prison warden, the offensive line coordinator, and the color commentator. Mohr steps into what seems like a far-less-exciting role, The Agent, who would probably get his ass handed to him by the prison warden in a fight. Peter Egan, the scriptwriter best-known for penning ESPN’s Playmaker spots, will be providing the story that brings the game’s fictional football league to life.

I’m not too sure Mohr and Caliendo are the type of “top talent” that will sell Blitz: The League II, but putting a prison warden into a football game is a step in the right direction for me. It’s not hell demons, but I’ll take it.

Blitz: The League II is scheduled to hit Xbox 360 and PlayStation 3 this fall. Anyone looking forward to this bone-crushing alternative to Electronic Arts’ Madden?