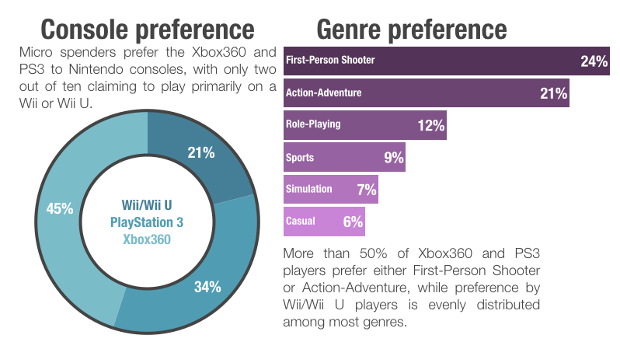 While my default is to rally against microtransactions, some of this data comes from consoles adopting free-to-play schemes wherein you’re paying for an aesthetic thing or still paying much less money than you would for a retail game, which is at least better than something like Dead Space 3 or Final Fantasy: All the Bravest.

But it’s sort of uncomfortable and depressing, too, because of the latter. But maybe that’s me liking whole, complete games from the traditional model I grew up with. But, hey, guys like Vlambeer still make things like Super Crate Box, Ridiculous Fishing, and Luftrausers without going microtransaction crazy. It can still be done.

Seeing those high percentage of microtransactions coming from first-person shooters and action games, the realm of big budget development, is still mighty weird, though. I barely purchase full fledged DLC let alone fall sucker to microtransactions. I’ve enough games to play that don’t have any; they’re easy to avoid. For now.

Console microtransactions: the best of both worlds [SuperData]