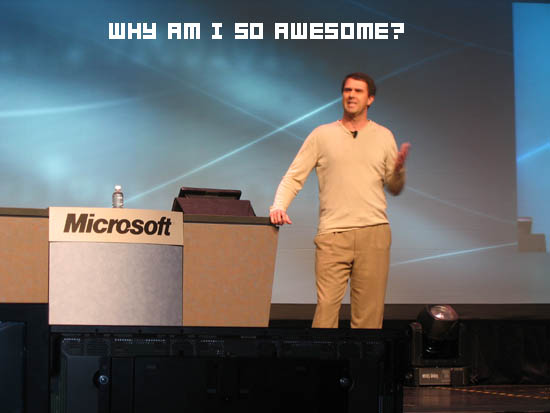 Microsoft’s Robbie Bach: service, \ˈsər-vəs\, noun – only Live, not PSN or anything else. also, I’m the best

When the Los Angeles Times asked Microsoft’s games and music business division president Robbie Bach if he was worried about the retooling of Sony’s PlayStation Network, he replied that Xbox Live doesn’t have competition, and that the PlayStation Network is not a service.

“It’s fair to say that Xbox Live is clearly head and shoulders above anything anyone else has tried to do. We don’t have competition,” says Bach. “Sony has done some things online, but nothing that can be called a service.”

Unattractive cockiness aside, we’ll totally agree that the Xbox Live service is at the top of the heap, and is a shining example of what an online gaming service should be.  It’s been around for five years and has 8 million users to be proud of, but that doesn’t mean that that the PlayStation Network isn’t a service, and it’s too early to rule it out as far as competition goes.

PlayStation Network users are downloading games, playing online, chatting, maintaining friends lists, and more. No, it doesn’t provide gamers with as much options and functionality as Xbox Live, but it still is a service for the network’s 3 million members. Furthermore, it is undergoing constant improvements that continue to add new features.

With upcoming PSN features like social networking and rumored music and video downloading services, it wouldn’t be wise rule out the competition just yet.

Cocky Bach: being the best service doesn’t mean you’re the only service.