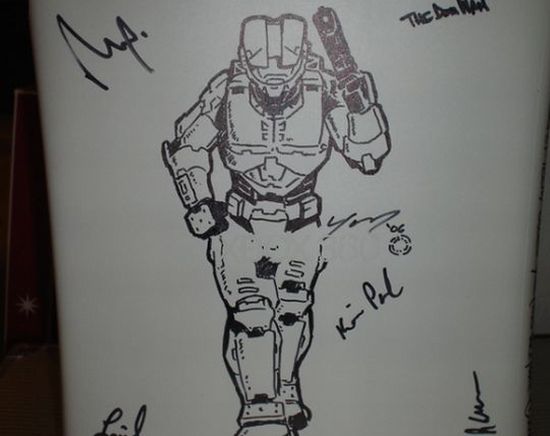 We’ve all heard of the constant horror stories about the plague known as RRoD. Hawty McBloggy brings word of possibly the worst case of RRoD yet. Nathaniel suffered the RRoD syndrome just like a majority of Xbox 360 owners out there. Usually it’s just a simple process of shipping off the console to get repaired. Unfortunately for Nathaniel, it wasn’t just as simple as that.

Nathaniel has taken his 360 with him to various events where members of Rooster Teeth, Bungie and the Xbox 360 team had signed his console. Not only that, but the comic artist over at Rooster Teeth had drawn an awesome looking Master Chief on the 360. Nathaniel contacted Microsoft before sending in his 360 who ensured Nathaniel that he would receive the exact same Xbox 360 back from Microsoft. Nathaniel even included a letter with the 360 to insure no harm would come to the unit (which you can read on Hawty’s blog).

Well, Nathaniel did receive the exact same 360 back, but some jackass decided to clean the Xbox 360 case. Keep in mind that all the custom work was done with sharpie so some jerk really took their time to destroy the work of art on the system. All that was left were a couple of smudge marks.

Seriously, how in the f*ck does someone look at the signatures and drawings and think for one second that they should clean the case down?! Microsoft assured him that he would receive his one of a kind Xbox 360 back unharmed and some guy who had way too much time on his hands destroyed the system. Hopefully he’ll be able to run into the people who signed his system originally and get them to sign it again. It’s pretty doubtful Microsoft will do anything to help the kid out.