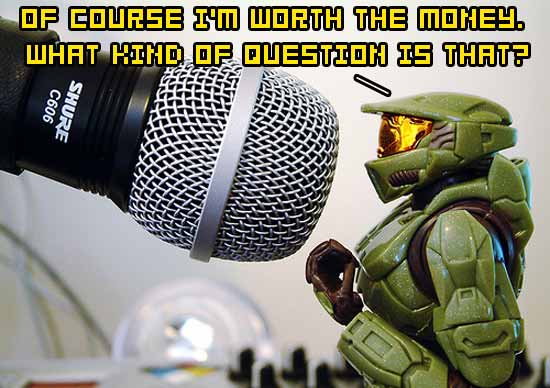 It goes without saying that Halo 3 is going to sell its fair share of copies when it’s finally released this September. If you consider the 820,000 people that took part in the beta between May-June and the million-plus pre-orders tallied back in August, a lot of people seem to have Halo on their mind. After two successful games, you could say that Bungie’s golden app pretty much sells itself these days. Nonetheless, Microsoft isn’t one to take chances with its cash cow, and what better way to nurture that cow than to throw plenty of cash at it.

You may have heard about Microsoft’s effort to flex some marketing muscle with the “Believe” TV ads coming this Friday (at a price of 10-million dollars), but the push to keep the closing chapter of the Halo trilogy at the forefront of our thoughts has been going on since at least December. As the current issue of Brandweek shows us, the latest TV spots are the proverbial “money shot” in the five-prong attack leading up to Halo 3’s big day. Yes the release date is nearly upon us, and millions of rabid fans should enjoy every minute leading up to the epic day. Commercials will be plentiful, making of specials will be hitting the airwaves, and tournaments will be doing their part to solidify as much interest in the game as possible. In a move reminiscent of a console launch, at least 10,000 stores have planned to open their doors at Midnight, in order to give eager fans the game as early as legally possible. As Jeff Bell, vice president of interactive entertainment of global marketing proudly states, Microsoft is casting a very large net with Halo 3.

“This is very different from the launch of Halo 2. We had our secret program, Ilovebees, but we didn’t have a beta, or participate at E3, we just kind of burst on the scene. This time around, we wanted to draw a broader audience. We wanted to invite everyone in.”

Everyone in, indeed. If you so happen to be one of the few that doesn’t buy into the Halo hype, or couldn’t possibly care less about Master Chief, you might want turn off the TV for the next few weeks. For everyone else, the cliff-hanger that’s been years in the making is about to come to an end. I haven’t been this excited since The Empire Strikes Back left us begging for the answers to the fate of the galaxy  — and we all know how painful a wait that was back in the day. There is a lot riding on this game, and I sure hope it ties up those loose ends and brings closure to the series in a manner fitting of a Master Chief.