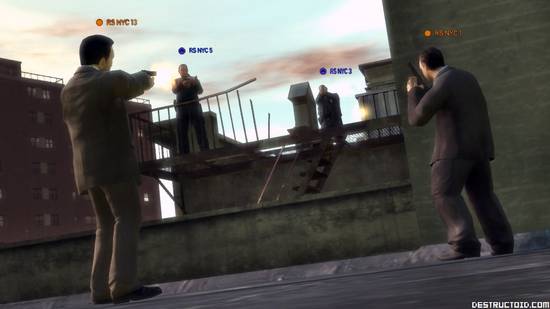 Speaking with Reuters, Microsoft’s director of product management for Xbox LIVE and Xbox 360, Aaron Greenberg, says Grand Theft Auto IV multiplayer is the new hotness. So much, in fact, that he thinks it has the potential to take the top spot as the most played game on Xbox LIVE, possibly overtaking Halo 3 and — gasp — Call of Duty 4.

“GTA is unique because it appeals to such a large audience,” Greenberg says. “It will likely be the best-selling game launched all year and we expect it will drive a lot of new members to Xbox LIVE.”

It’s hard to argue with the “best-selling” remark, and he may not be too far off when he talks about Xbox LIVE — the game does ship with one month free of Microsoft’s paid online service (which I redeemed, thank you very much). Greenberg praises the game’s online component, saying that he “can’t imagine anyone owning a copy without trying to play it on Xbox Live.”

Sitting down in the closed-doors setting of Rockstar’s New York City office, I wasn’t entirely sold on Grand Theft Auto IV‘s multiplayer. I noticed the potential, liked how some of it was implemented, and was in awe of the fact that you could play across all of Liberty City. Not being a huge online gamer (sorry, Friday Night Fights), I didn’t think I’d be playing it that often. But now that I’ve spent more time with it on the comfort of my own couch, I’m starting to think otherwise.

Have you guys pulled yourself away from the game’s deep single-player game long enough to spend time online? Do you think it’ll take awhile for the online to really catch on, simply due to the fact that you can play the game offline for upwards of 50 hours?