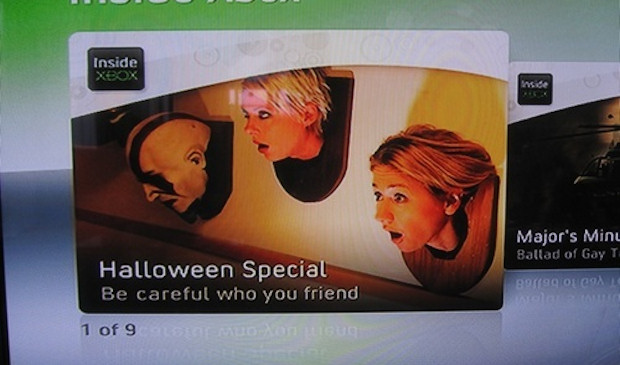 Okay, stupid story time, but the implications are very obvious. The latest edition of Xbox Live’s “Inside Xbox” series is a Halloween edition, and as such, it makes use of stereotypically scary imagery. The episode’s NXE panel shows some heads mounted on a wall as hunting trophies, but what’s this? Isn’t that one Kratos? Why yes, I do believe it is.

It appears that Microsoft has killed and beheaded the star of PS3 exclusive God of War III. This is of course a rather cheeky jab at the competition, which is doubly hilarious since I believe Kratos could kick seven shades of sh*t out of any Microsoft executive on any day of the week.

Anyway, what do you think of this? Amusing jibe, or tasteless insult? I guess that all depends on which side of the fanboy fence you sit.

And before you ask, yes it is a slow news day.

Filed under... #God of War#Xbox Live