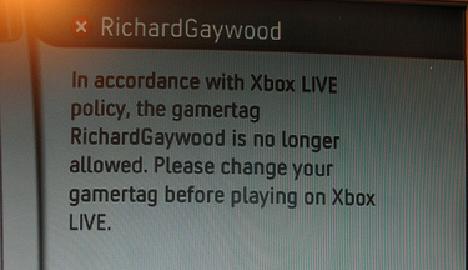 Last week we told you about the Xbox 360 user whose gamertag “theGAYERgamer” was banned due to the name being “offensive.” Well, the big ol’ gay shenanigans are back!

We were just contacted by a man named Richard Gaywood. (You already know where this is going, don’t you?) Apparently his gamertag has now been banned for, you guessed it, containing the word “gay.” The kicker is, he wasn’t using the word in an offensive way: it is JUST PART OF HIS SURNAME!

According to Richard (and his helpful photo above), his gamertag — the horribly offensive “RichardGaywood” — was banned last night, with Microsoft recommending he create a new one.

No word yet on whether people actually complained (for the love of humanity, I hope not) or the name was just flagged by some automatic program, but, regardless, this is just a little ridiculous. It’s the poor guy’s name, for crying out loud. I feel bad for Oscar-winning actress Marcia Gay Harden. I heard she really likes UNO.