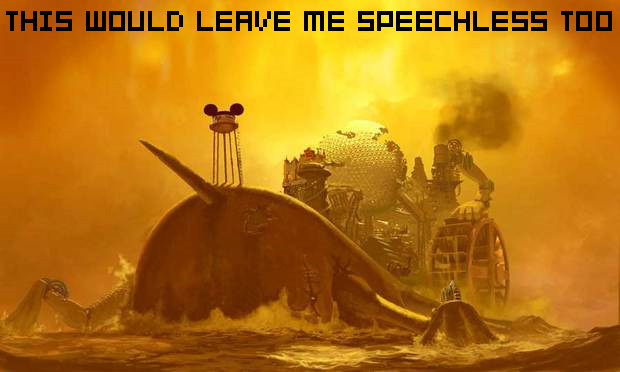 Let’s kick off the evening with a double shot of Epic Mickey news. First, a quote from designer Warren Spector from an interview with 1UP: “I don’t do anything that isn’t extensible. In my head, I’ve got two more planned.”

Whoa whoa whoa. An Epic Mickey trilogy? But what about Duck Tales? “In the business world of reality, those games have not approved, and who knows if we’ll ever see them.” You had me there for a second, Spector. If the game stays true to the original vision, and plays decently, this could be a very good thing.

And before we get too far ahead of ourselves, The Cut Scene has an interesting tidbit about Mickey’s dialogue in Epic Mickey. As Spector puts it, “I made the creative decision that characters wouldn’t talk in the Cartoon Wasteland.”

“If I’m trying to re-introduce this character to an audience, there are certain connotations with that voice that I’m going to have a hard time overcoming.” This was one of the few things that I couldn’t stop thinking about when the game was announced.

Speech bubbles were the way to go for this project, if you ask me.