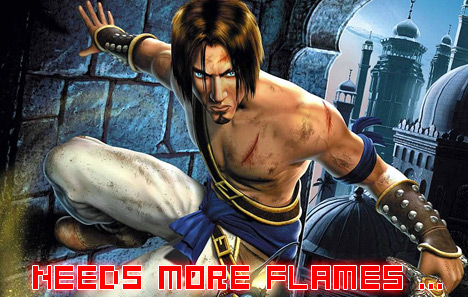 Michael “Next, I’m going to bang your mom” Bay has just been revealed as the director for the Prince of Persia movie. Jerry Bruckheimer, the producer of such hits as Pirates of 21 Jump Street and CSI: Miami, has been slowly putting this whole thing together, and earlier today, IESB.net got word that Bruckheimer has tapped Bay to sit in the fancy chair for the film, which is now slated for a Summer 2009 release.

You might have heard of Mr. Bay from his past hits, such as The Rock or Pearl Harbor, or perhaps you will recall that he’s the guy drawing the ire of the Internet for utterly corrupting our beautiful, innocent childhood memories with his upcoming cinematic abortion: Transformers. While we, the Internet, can agree he has a history of making things ‘splode real nice, his latest venture is mind-numbingly idiotic; the man is trying to top Orson Welles’ final films, with Tyrese, and a “reimagined” Megatron who epitomizes the term vagina dentata.

The problem with a Michael-Bay-helmed Prince of Persia lies in the fact that the series has always been about puzzle-solving, as opposed to stabbing everyone’s head off with a rocket launcher. I’m almost positive that Bay’s version of PoP will star Vin Diesel, Ludacris, and Andy Richter, and that the Prince will have no less than five exploding sex scenes.

As for what an exploding sex scene is, you’ll have to see it for yourself; only in theaters, Summer 2009.