One of my favorite parts about Mexican cuisine is its cohesiveness. It’s a property found in all my favorite types of foods: Italian, Chinese, etc. You take a swath of semi-disparate elements, tie them together with a sauce, and boom; you have an enormous meal you can gobble down in matrimonial mouthful. Just take guacamole, for example. Five or six ingredients plus spices come together to form a more perfect union, resulting in one cohesive dip so powerful Burt Ward’s Robin exalted it in the 1960’s Batman TV series.

DrinkBox Studio’s (Tales from Space: Mutant Blob Attacks) Mexican flavored, Metroidvania-inspired brawler takes from its namesake an amalgam of loved elements and throws them together in a comprehensive, delectable dish.

There’s even a wise, angry, magical goat man. Also, you can turn into a chicken. At will. 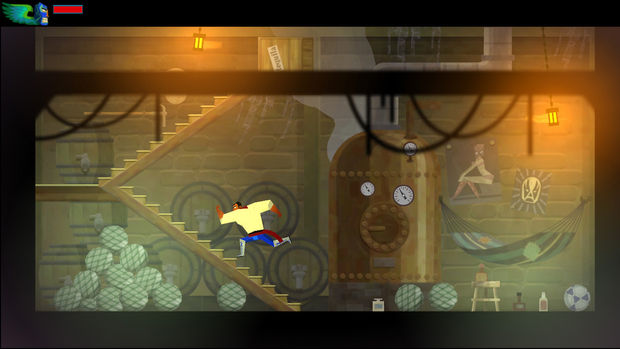 Juan, a down on his luck agave farmer living in a shanty, is the misfit star of DrinkBox’s new title. As some element of fortune would have it, Juan becomes imbued with the awesome powers of a luchador. Just in time, too, as El Presidente’s daughter, whom Juan has been crushing on since boyhood, has recently been kidnapped. Are you a bad enough hombre to save her?

It’s the tired damsel in distress premise, admittedly, but the game wears its old school influence on its sleeve. It draws from the “Metroid-vania” well, which means expansive maps filled to the brim with secret offshoots and alcoves, many of which are inaccessible without the right moves. Plus, I lost any sort of glazed over “been there, done that” derision once I saw the game in motion. The art style is just too charming, featuring tightly angular geometry reminiscent of paper craft, and bold, solid colors. I particularly love the minimal, angular effects that the power moves give off.

Where Guacamelee starts putting its spin on the Metroid-vania formula is with its heavy combat orientation. Often you’ll be locked in rooms and have to dispatch waves of enemies to progress. There are even combat challenge rooms. As soon as I started playing, I could see why: the combat is a blast. The impressive, fluid animations decorate a clinical, precise action game. Different power moves, which are unlocked during progression, are mapped to the circle button, while square allows for regular attacks, and triangle for contextual moves like the invaluable throw. 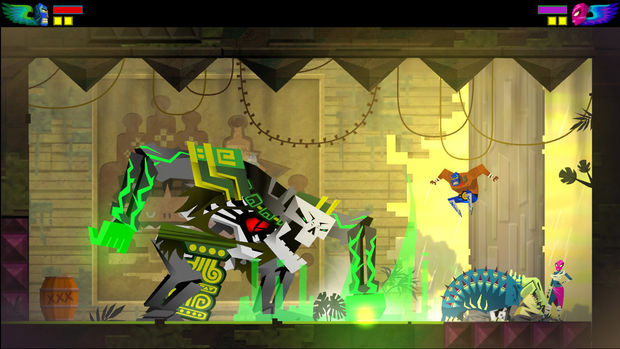 Those wanting to max out there money yields can try to string together a higher and higher combo by linking up to three regular attacks with stamina-restricted power moves and throws. Throws are particularly fun, but also incredibly useful, as enemies can be thrown into their cohorts, stunning them and proving you valuable breathing room. There’s also an equally useful dodge mechanic, mapped to the right stick, which can dodge everything but fire attacks. You’ll need it.

In my brief hands-on I encountered an impressive array of baddies that required different means of dispatching, keeping things engaging and taut. My favorites were definitely the bleached-white skeletons in yellow ponchos and sombreros that reminded me of Death in Adventure Time. They’re tough, fast buggers. Even a few different enemies on screen can pose a challenge, especially when they’re split between planes of existence.

Key to Guacamelee is the World of the Dead, from which the enemies originate, which draws heavily from Día de los Muertos, the “Day of the Dead.” Initially, accessing portals will switch between the worlds of the dead and living, but eventually you’ll unlock the ability to do so manually. This in turn opens up new wrinkles in the gameplay. Certain areas which might’ve proven previously inaccessible can be accessed and the mechanic also allows for some exciting, precise platforming, as the worlds of life and death have different platforms. 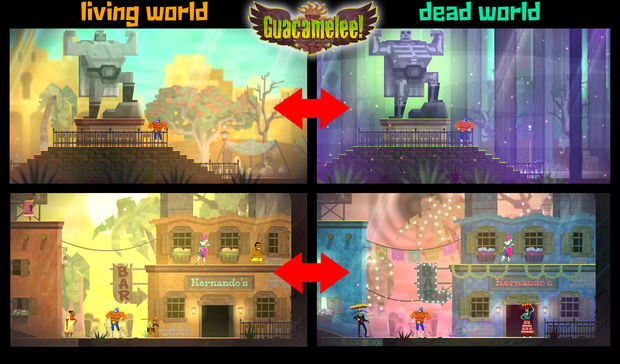 The mechanic can also lead to some anger-inducing grieving, as the title allows seamless, drop-in/drop-out two player local co-op. I only tried combat sections co-op — enemies will scale to take a bit more damage — so I’m not sure how the precision platforming will be tested with a friend, but beating things up in tandem was a blast, especially when you link throws together to add insult to injury. I was also quite partial to the female luchador who serves as Player 2, though I think that can be said about most of the character design and enviable animation work.

One cool addition is the ability to use the Vita as a controller for the PS3 version of the game. It can be used in a tandem with a PS3 controller for those who have a friend, but only one DualShock 3. It can even be used solo, with the added bonus of having the map displayed on the Vita’s screen at all times. This could prove invaluable for completionists aiming to explore every nook and cranny, eliminating the wasteful opening and closing of the map via select while playing with a PS3 controller. Being a completionist in this instance may just be well worth it, too. DrinkBox’s Chris McQuinn furtively hinted that the chicken’s abilities get better the more of a completionist you are, so perhaps some mad chicken powers wait at the end of the rainbow. Also a Hard Mode.

Guacamelee is releasing simultaneously for PS3 and PS Vita and will feature cross saves between the two systems. No word yet on whether the game will be cross buy. DrinkBox and Sony’s Pub Fund partnership doesn’t mention cross buy contractually, so the details there are still being hammered away. Otherwise, those itching to get a spicy taste of the game can check it out at PAX East.