Fans went wild when Nintendo announced Metroid: Other M at E3 last year, and for good reason: the game looked like a return to form for the series in many ways, some sort of odd hybrid of 3D graphics and 2D gaming. They also applauded because the title was being brought to life by the hands of two very unlikely parties: Super Metroid director Yoshio Sakamoto and Team Ninja (best known for over-the-top fighting and action games like Dead or Alive and Ninja Gaiden).

Today, Nintendo let press go hands-on with the first hour or so of Metroid: Other M, and quite frankly, it surprised me. It’s a traditional Metroid experience that offers up a completely different take from anything we’ve seen to date.

Before Nintendo would even let us go hands-on with the game behind closed doors, it sat us down in front of a huge screen to watch the game’s hearty opening cinematic, detailing the final moments of Super Metroid.

The look and feel of it is unlike anything you’ve seen in a Metroid game; the world and the characters are familiar, but with a decidedly darker take. Mother Brain, for instance, is depicted as a hulking, slimy alien beast that’s more reminiscent of an H.R. Giger creature than what you might remember from the original Super Nintendo title.

Nintendo is throwing around the word “cinematic” a lot when referring to Other M, and that’s probably the best way to describe it. It’s dialogue-heavy, with Samus providing a calm, serious voice that keeps with the game’s sober (perhaps “more mature,” if you will) tone. Whereas previous Metroid titles may have implied a deeper story than what was on the surface (or in the case of the Prime titles, provided backstory based on objects and text found in the environment), it’s obvious that Other M is going to wear its narrative on its sleeve.

Within the first hour of the game, you’re introduced to a handful of characters, including a number of folks from Samus’ past. Without giving too much away, the game begins when Samus answers a distress call from a partially destroyed space station. Once she arrives, she finds that the Galactic Federation has already arrived and is composed of her former crew members. A voice-over shown in a flashback explains that the now-bounty hunter had left the Federation due to an “incident,” surely to be explored later in the game’s story. 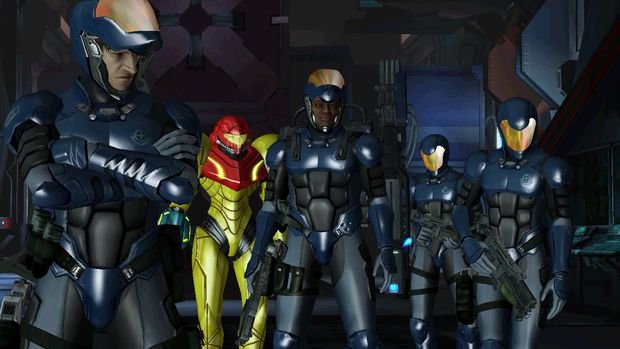 This focus on cut-scenes and dialogue was striking and unexpected, if not alarming. In these opening scenes, Samus speaks more, and is spoken to more, than in all previous Metroid titles combined. As someone who had never delved deep into the Metroid mythology, I truly do feel that I know more about Metroid‘s female protagonist than ever before, and that’s exactly Nintendo’s goal with Other M.

At this point, you’re probably wondering just how Metroid: Other M plays. I was surprised to find that it’s not simply a 2D-style platformer set to more robust 3D visuals. In fact, it’s the strangest hybrid of third-person and first-person action that I’ve ever played.

Other M is played with the Wii Remote and nothing but the Wii Remote. Held on its side like a standard controller, you’ll control Samus using the D-pad to move left and right, as well as into the background and out to the foreground.

Other M doesn’t simply play along a 2D plane, as the early trailer suggested. While there are some areas that feel like standard 2D action and platforming, Other M‘s camera and depth of navigation actually change depending on the situation and the area, some of which will allow you to move around in a in fully three-dimensional space. 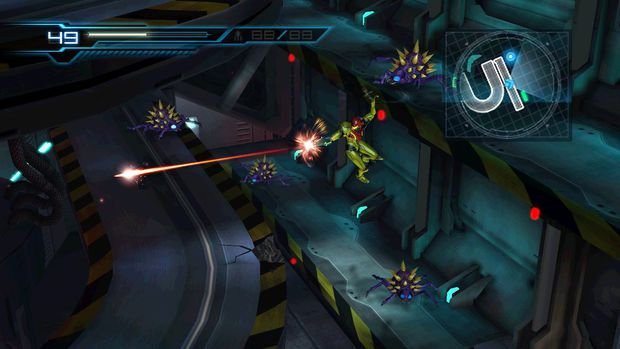 Because of this, a simple blast of Samus’ arm cannon (perform with the “1” button) aims automatically. A room full of enemies will be auto-targeted, and it’s possible to just rapidly tap the button to take out a cluster of foes, as long as you’re facing in their direction. It takes a moment to get used to this; my inclination was to try to “aim” at each of them individually. But letting the game take over for me was actually liberating, and made the rapid-fire button-pressing feel a hell of a lot like the 2D Metroid games of old, even when I was running around in a 3D space.

You can also go into first-person mode by turning the remote and pointing it at the screen. At this point, Samus’ visor comes up, and you’re allowed to explore the environment for new paths and items. This mode is also how you’ll fire your missiles, and it appears to be the only way to activate them. By pointing at and holding the reticle on an enemy (or something in the environment), you’ll lock on and be given the ability to fire a rocket.

This “turn the remote and point at the screen” thing feels completely unique and also … odd. Pulling your fingers off the D-pad and buttons takes a few moments, moments that are precious in a heated battle. This was particularly difficult to do in one of the game’s early boss battles, some hulking monster made from purple space bugs. The goal of this fight was to hit the creature in its eye with a rocket, and I had some issues with coming to a complete stop, aiming the Wii remote, and waiting to fire. 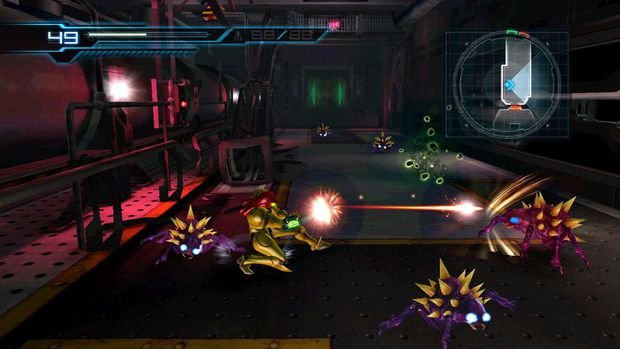 Samus has also been given a few other new abilities not previously seen in Metroid titles. She can now dodge enemy fire and other attacks by tapping the D-pad in any direction immediately before getting hit. In an early tutorial setting, I was also able to get close to enemies and hit the attack button, which performed a melee kick attack. And while I wasn’t able to use it in any real-time combat situations, it’s also possible to hop on and mount enemies for an attack.

Tying in directly into the more personal feel and approach to Samus that mentioned earlier, the game takes total control over the camera — depending on the situation and room, you’re given a different (sometimes more cinematic) view of the action. In one smaller room I stepped into, the camera pulled in tight over over Samus’ shoulder (think Resident Evil 4), giving me an intimate view of my investigation.

Interestingly, killing enemies will no longer provide you with health or missiles. Instead, tilting the Wii Remote vertically and holding “A” can replenish your supply at any time. The same can be done for health as well; if it dips into the red, tilting the remote and holding “A” will replenish one energy tank. Also, weapon and suit “upgrades” won’t be found through exploration. Instead, in the sections I played, the Commanding Officer of the Galactic Federation (whom you’ll be working alongside) “authorized the use of” morph ball bombs.

With Tecmo and Nintendo on board, there’s little doubt that Other M will be a high-quality experience, and it showed in the short demo. Visually, the game is stunning, a completely fresh take on the Metroid universe. From a gameplay perspective, the game challenges expectations of the series’ formula. Whether or not fans will embrace the change — or still call for a true 2D return to form (Metroid Dread, anyone?) — remains to be seen.

Spending more time with the game (and seeing how the narrative and game unfolds) will be the real test as to whether this new take on Metroid can find its place among the classics. We’ll find out soon — Metroid: Other M ships on June 27.