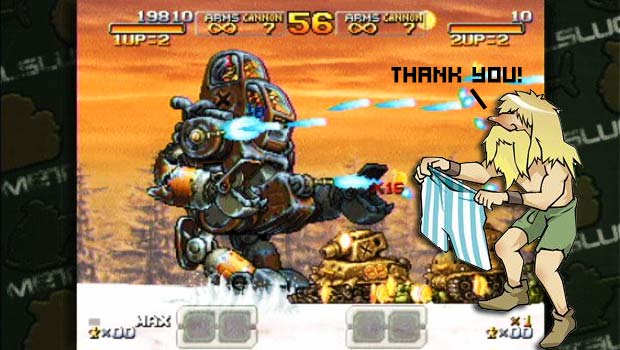 Hey, look at that, it’s a new Metal Slug. Who knew? I didn’t, because if I had, I would have pre-ordered it in Japan, where doing so apparently nets you the sweet pre-order bonus of a pair of underwear. This new PSP title features seven stages of militar … wait, underwear? What?

Apparently so. SNK says quantities are limited as well, so if you plan to import this, you may want to specify that you’re looking for a copy that comes with a free set of drawls. Anyway, Metal Slug XX includes seven stages, the combat school mini mission feature that was seen in Metal Slug 7, and the triumphant return of KOF characters Ralf and Clark.

SNK says the game will fully utilize the PSP hardware to make for gorgeous 2D visuals, and features ad-hoc play this time around for 2-player co-op. New Metal Slug action is always good news to me. The game hits Japan on December 23rd at 5,040 Yen. No word yet on a US release, but if it hits PSN digitally it’ll be a cinch to get either way, albeit without the bonus underwear.

Also no word on whether the underwear are the magical kind that you can take off without removing your pants like the POWs in the game. Check out a trailer for Metal SLug XX after the jump and hit the gallery for some screens.