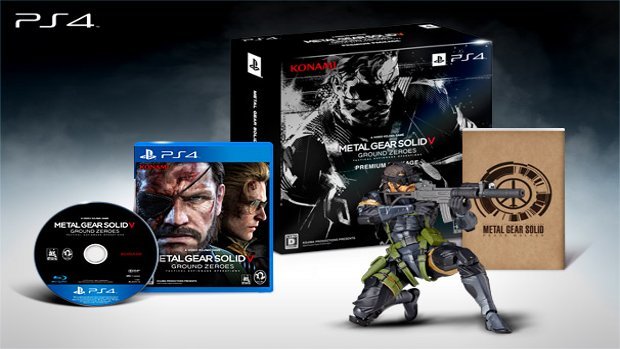 Features a figurine, book, and a copy of Ground Zeroes

Just after showing off the new trailer for Metal Gear Solid V: Ground Zeroes during last night’s PS4 All Access event, Konami has revealed plans for its premium edition to be released in Japan. Currently on sale at Amazon JP, the premium package is available for the PS4, PS3, and Xbox 360 and it includes a copy of Ground Zeroes, a novelization of Metal Gear Solid: Peace Walker, and a highly-detailed Snake action figurine, with accessories, made by Revoltech. The bundle is priced at 8,480 yen, which is about $85, and they are set to release sometime in spring.

Of course, there hasn’t been any word on whether or not the West will see a similar offering, but it is something for importers to consider. What’s interesting is the absence of an Xbox One version, but of course that could be just because it isn’t out yet. The package certainly looks wonderful, and Konami is clearly going all out for this micro-release.