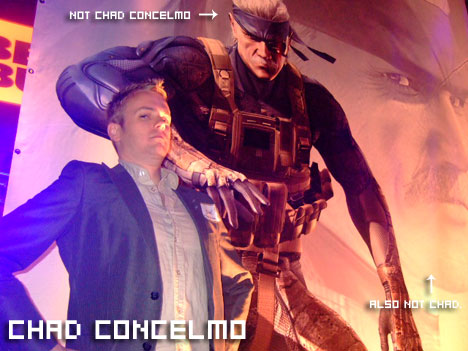 By now, everyone should have had their chance to pick up a copy of Metal Gear Solid 4. In fact, some of you may (or should) be playing it right now. With a number of a midnight launches taking place around the country, we (meaning myself, along with Chad and Aerox) did our journalistic duty and attended the Konami Metal Gear Solid 4 launch party in West Hollywood, California.

It’s a rough job — listening to music; taking advantage of an open bar; eating sushi when it was presented to us; and rubbing elbows with industry pals. Why do we put ourselves through such trials? To bring you these exciting photos, of course, and to remind you that Metal Gear Solid 4 is now available for the PlayStation 3. Also, we like music, drinks, and sushi.

Not far from where the outdoor party was held, Best Buy held their own midnight launch event. What appeared to be hundreds of people lined up to grab their copy of the game, and to snag an autograph from Solid Snake voice actor David Hayter. Hours earlier, on the other side of the country, a similar event with Hideo Kojima took place in New York City. No word on whether drinks and sushi were served.

Any Destructoid readers hit their local game shops for launch events, or did you just wait to pick up your copy today?