It’s still really neat, but I ruined it.

The first major disagreement I ever remember having with my first girlfriend wasn’t about jealousy, it wasn’t about a missed anniversary, it wasn’t even about sex. Instead, it was about a person’s natural ability to draw. She was an artist (still is, to the best of my knowledge), and she took some measure of offense to my idea for some kind of device that would allow people to overcome whatever barriers stood between their hands and the image in their head; to draw whatever they wanted at will.

To her, being able to draw was something that set her apart. It was something that made her special, and she understandably took pride in that. To me, it was about finding more seats at the table. Taking an extra step out of creation doesn’t necessarily make everyone an artist; I mean this as inoffensively as possible, but everyone speaks a language and yet not everyone is a writer. Of course, there’s always the ever-present concept of privilege — a strong education can hone the innate skills of a budding wordsmith, but not everyone has access to those particular tools.

But even in a utopia, where every person started from the same point, not everyone is born with the need to create nor a vision they felt a burning need to execute, so I didn’t really fully empathize with her fear. Look at video production, for example. YouTube is a wide-reaching publishing platform, everyone has phone cameras, and there are plenty of free video editing tools that should fit the needs of the prosumer. And yes, there are tons of bad videos clogging the pipes of the internet, but at the same time, there are creators have finding dedicated audiences, thanks in part to how easy it is to create video content. The democratization of tools is one of my favorite concepts of the modern era, and I’ve been dying for it to arrive in the video game sphere. Enter the MetaArcade Adventures Platform.

This is my very long-winded way of saying the MetaArcade Adventures Platform is another great step towards populist video game production tools, and I ruined it with my pee jokes. 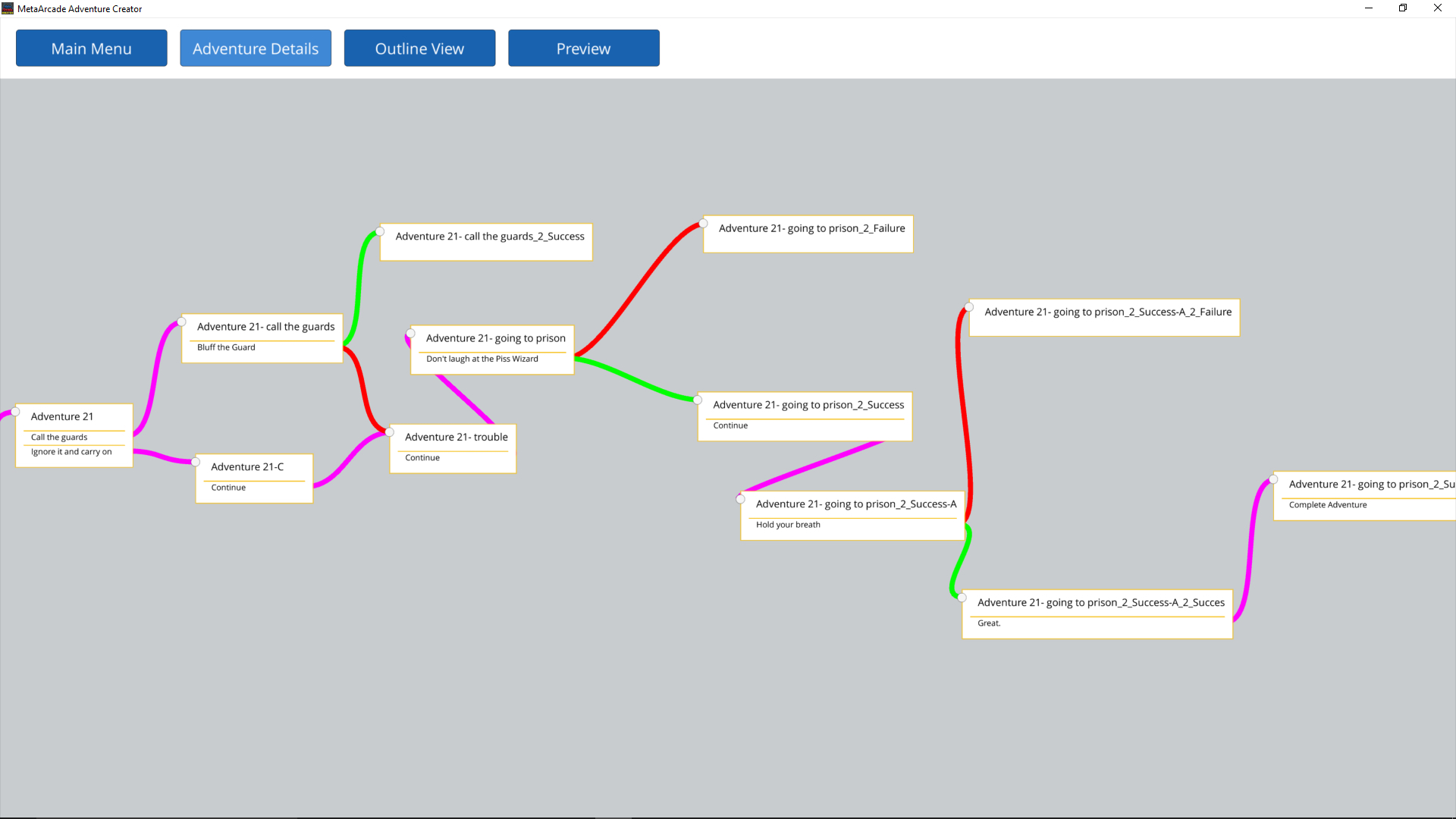 The MetaArcade Adventures Platform — or “MAAP,” as I’m going to call it for brevity’s sake — reminds me of Twine, a similar text-based adventure creation tool, in that it makes developing a text adventure ridiculously easy. “We wanted to see if we could build a WordPress-esque content management system to make an adventure game,” David Reid, the CEO and founder of MetaArcade told us at PAX South. “This is a view into how we’ve been making [our adventure games].” If you’ve tried the team’s mobile adventure game Naked Doom, you know how the MAAP-developed games will look. For everyone else, it’s essentially a crisp choose-your-own-adventure book, splayed across a digital screen.

On the macro scale, players are shown a web of scenarios, some of which will take them farther into the adventure and some that will just lead to a gruesome death. Much like the Fighting Fantasy books, you could hypothetically incorporate an element of dice-rolling and character creation. Then on the micro scale, users can make a scenario as evocative as their imagination allows, adding on to each scenario with key art that evokes old-school fantasy as well as music cues and sound effects.

I got to mess around with the editor at PAX South, where MetaArcade was inviting congoers to step up and add to a collaborative “MegaAdventure” that would be polished and published after the weekend was over. (At press time, the PAX South MegaAdventure is not available, but we’ll update the post with a link to the game when it arrives) I swung by as the con was starting to wind down on Saturday, and picked up the story as the player character was being hauled off to the Fantasy Drunk Tank. As you all should know by now, I’m a real sensitive art school type, so I decided to write a scenario where the player character met an elf who claimed to be the Piss Wizard: The Wizard of Piss. 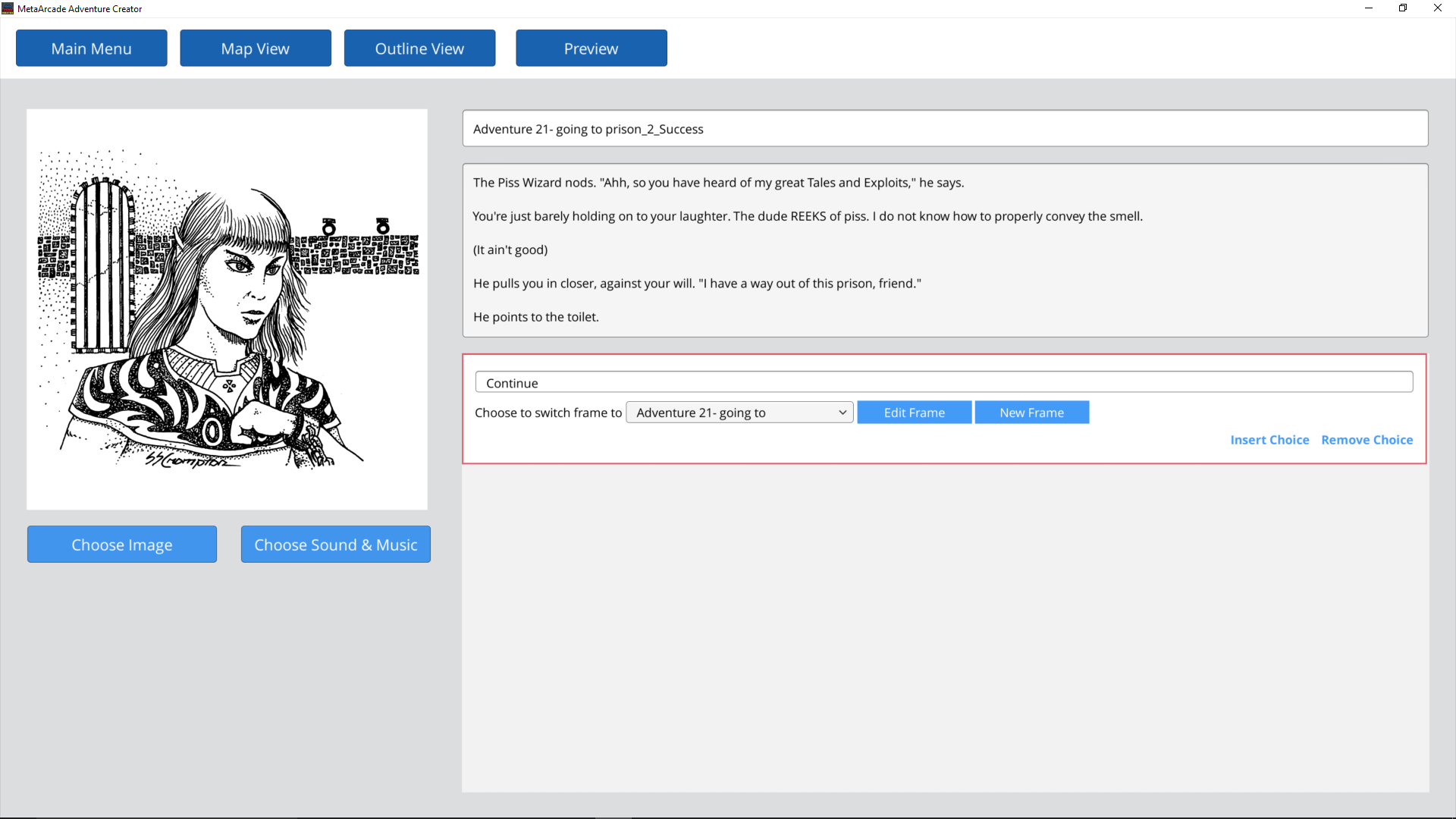 Now, I could make all kinds of excuses for my sense of humor on that particular January afternoon — I was tired, I was sick, I wanted to see what I could get away with on MAAP — but it really comes down to this: the phrase “Piss Wizard” was just cracking me up that day. Since nobody at the booth was stopping me, I continued to add to my narrative. I decided to improvise, repurposing a piece of stock art that depicted a character swimming & some generic water noises for some various sewer-related escapades. I added a Constitution check to see if you could hold your laughter when introduced to the Piss Wizard. By the time the PAX Enforcers started pushing folks out of the convention center, I had brought my awful little corner of this adventure to a close.

The gap between my vision for the adventure and reality was almost nil. I did just about everything I wanted to do with little to no effort on my part — the WordPress comparison is very apt. The built-in stock art and sound cues give users another layer to play around with, especially considering that both the art and sound options are customizable. It’s a little easier to use than Twine, since I was able to jump in with little to no tutorialization, so I can’t imagine any interested parties will have a rough time with the creator.

Currently, MAAP requires players to publish adventures through its platform without an option for independent executables, although Reid tells me “we should be able to make [executables] happen.” It’s curious that the app won’t launch without it; right now, the use case for MAAP seems to be either people looking to dip their toes into publishing a small game or goofballs like me that will be writing elaborate adventures and sending them off to their friends. The MAAP will also double as a publishing platform, where users can sell their games on digital storefronts and get a cut of the revenue. You can also make your own art & sound packets and sell those to fellow MAAP users, getting money from that as well.

I love the idea of a choose-your-own-adventure creator, especially one as full-featured and responsive as the MetaArcade Adventures Platform. It’s got a refreshing, old-school vibe, with plenty of room for users to re-contextualize everything as they see fit. MAAP’s launch is still a ways off, so it remains to be seen if players will embrace it. I can easily see MAAP floundering without a strong userbase, so I hope there are enough creative people in the games community looking for the right outlet. From what I’ve seen, I think MAAP could be that outlet for a lot of people.