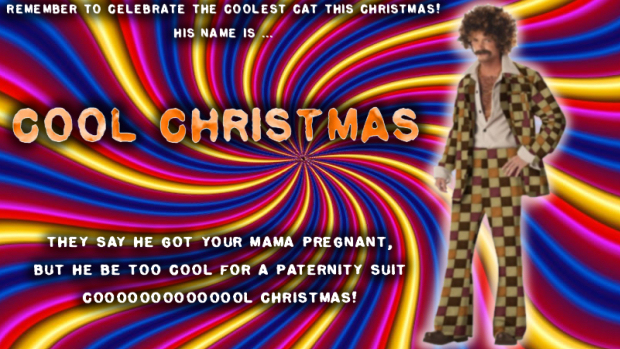 Of course, the main reason for the season is getting scads of free loot, so tell us what the BLOODY HECK you got, why don’t you? Also, check out below to find out what the Destructoid creative family received, in all their wonder and glory.

Tony Ponce: I didn’t get any game-related stuff from my family, but I did get a pretty pimp night robe. I bought myself some gifts recently though, like, uhhhh, back issues of Nintendo Power. And my Dtoid Secret Santa (Max) sent me 8-bit sunglasses and a DuckTales / Darkwing Duck crossover graphic novel co-written by Warren Spector.

Christmas is about giving, so rather than talking about what I got (Pajamas), I gave my 13 year-old nephew a sweet 3-game combo of Mass Effect Trilogy, XCOM: Enemy Unknown, and Modern Warfare 3 (with an OK from his parents, of course). Best yet, I also secured a promise from his non-gamer father (the extent of his gaming experience is FIFA to give Journey a try. Fingers crossed!

Patrick Hancock: Virtue’s Last Reward and XCOM on the gaming front. Oh, and a little game called Shining Force III for Sega Saturn! Booya! And a motherflipping SUPERBALL!!!! already bounced it in the street as hard as I could. Also I am 7.

Jonathan Holmes: I got the latest Adventure Time DVD. It’s called Jake Vs. Memow. It comes with a hat that I haven’t taken off since. I also got The Jerk starring Steve Martin. I know most of the lines to both that TV show and that movie by heart, but it’s nice to have them around, particularly so that I can let other people borrow the. I can’t believe how many people have never seen The Jerk.

For games, I got Persona 4: Arena, Kirby’s Epic Yarn, and Journey: Collector’s Edition. I’m particularly excited to play the games on the Collector’s Edition that haven’t been released elsewhere. I heard they were great. I also bought myself DreamMix TV World Fighters, a Japanese Smash Bros. clone that features Solid Snake, Megatron, Simon Belmont, the wolfman from Bloody Roar, and many others. That ought to be good.

Jim Sterling: Got some neat stuff from the wife off my babyish Amazon wishlist, chiefly a big ol’ Terminator endoskeleton figure and a NECA Left 4 Dead Smoker figure. Also, Return of the Living Dead on Blu-ray, because yes! Oh, and some 3D glasses for the new TV at last. Can’t wait for fifteen minutes of 3D Dynasty Warriors followed by an hour of headaches!

Big thanks to Podtoid/Jimquisition fans who were also lovely enough to send me a Harley Quinn Arkham City figure, and Sealab 2012 on DVD, as well as Mat Jones for buzzing along season one of The Venture Bros.

Jonathan Ross: I got a shirt from Banana Republic.

Darren Nakamura: My wife and I got each other a Nexus 7.  Been playing Jetpack Joyride on it.

Allistair Pinsof: I got some clothes from Uniqlo (for Dale North cosplay on the weekend), kitchen gadgets, Need for Speed Most Wanted (PC), and a Nexus 7. This is my first time seeing our site on a tablet and it is boo-tee-full! Merry Chrimbus, everyone!

Mxyzptlk: I got a nexus 10 (which I got early so I’ve been already using it the last couple of weeks) and a Batman hoodie. Also my brother and his girlfriend bought my MAGfest pass for me.

Dale: Happy Corgi Christmas! I got a Staub Cocotte with a little piggy on top — I love it. Candy? For sure. I’m already fatter. Oh, and corgi magnets and a corgi pillow. Bigger gifts include A 70″ Sharp TV and Definite Technology 8060 speakers. I’m spoiled!