[Update: Added in the new trailer and new screens of Catwoman cleavage.]

Watching Rocksteady Marketing Manager Dax Ginn demo the studio’s upcoming Batman: Arkham City is a sight to behold. He’s a bit like a hyperactive youngster, howling things like “Kablammy!” and “KA-POW!” as he works the Dark Knight through a mob of thugs.

During a recent pre-E3 event, he switches gears a bit, transforming into a blend of a carnival barker and a Las Vegas prize fight ring announcer.

“You may know her as the feline femme fatale who always has a quack for landing on her feet,” he says loudly as he makes Batman approach a stray cat on a Gotham City rooftop. “She loves piña colada, but hates being caught in the rain. Ladies and gentlemen, it gives me great pleasure to introduce — playable across all three platforms — an integral part of the Arkham City experience… Selina Kyle, a.k.a. Catwoman!”

He taps a button on his Xbox 360 controller, and Batman dashes from view, quickly replaced by the sinuous antihero.

“I think I’m going to enjoy this,” she purrs. 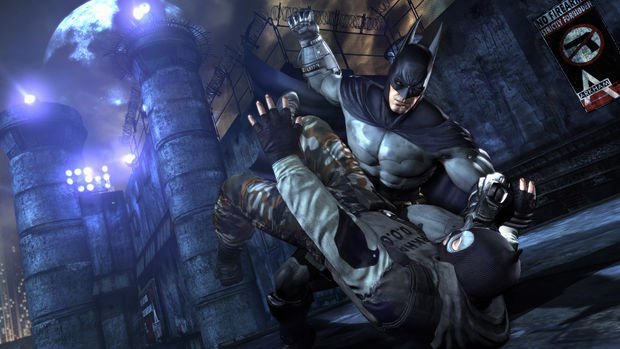 “She is kind of a special guest star,” Ginn explains, saying in no uncertain terms that Arkham City is still very much a Batman game. Catwoman will “comprise about 10 percent of the overarching game experience,” he says. While her gameplay is a bit “scaled down” — she’ll have three gadgets at her disposal, while Batman has 12 — the cat’s still “fully featured.” 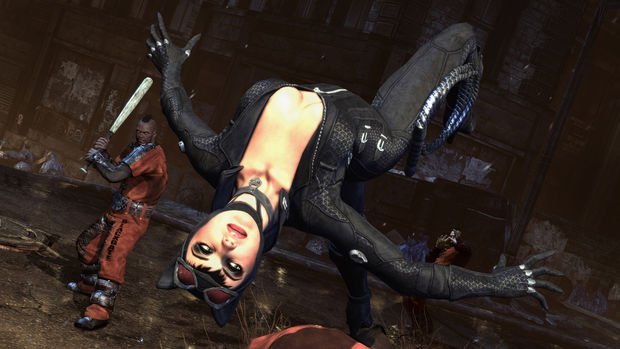 There will be some forced switches that are intertwined with the game’s story, but what we saw was one of Catwoman’s many side quests. She’ll do what she does best, and that’s steals stuff.

“She’s using the chaos of Arkham City in order to achieve her own ends,” Ginn says, “and what that means is establishing what she can steal, and how quickly she can get it.”

The ultimate score for Catwoman in this situation are the “stolen stolen goods,” items that Hugo Strange has himself pilfered from former Arkham Asylum inmates. These goods are being secured underground by Strange’s private TYGER army, who are really no match for our cat burglar’s adroit skills as a robber. 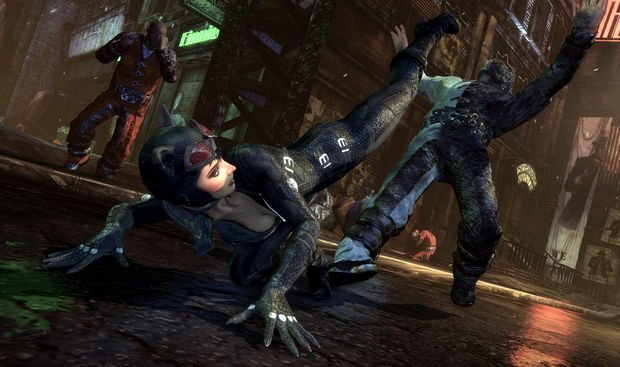 From the roof tops Catwoman moves throughout Arkham City, using a combination of her whip and claws. Watching it, it’s impossible not to be reminded of Treyarch’s open-world Spider-Man games. While Batman’s movement throughout the city is about gliding, swooping, and striking from a above, Catwoman seemingly has a more intimate connection with the game world. As she advances through the city, a combo meter builds up based on “perfect” swings and movements; the better you perform as a player, the faster she’ll move.

Her first order of business is infiltrating the vault where the valuables are being kept. To do this, she finds a manhole cover and enters the sewer system. While Batman can use his skills to detect threats and other things about the game environment, Catwoman’s “Thief Mode” only allows her to spot the best stuff worth stealing. She’ll have to use a combination of stealth, gadgets, and combat to clear out the TYGER guards blocking the path to her spoils.

Catwoman’s combat is not unlike Batman’s in that it’s based on rhythmic button presses and proper timing of reversals and parries. She does move faster, however, with her own set of animations and tools. In her first encounter, she throws a bola in the face of one guard, snaps her whip at another, and throws down caltrops which sends a card tumbling over. Her movements are even more gymnastic than Batman’s — at one point she hops on an enemy before kicking off of him into a back flip. 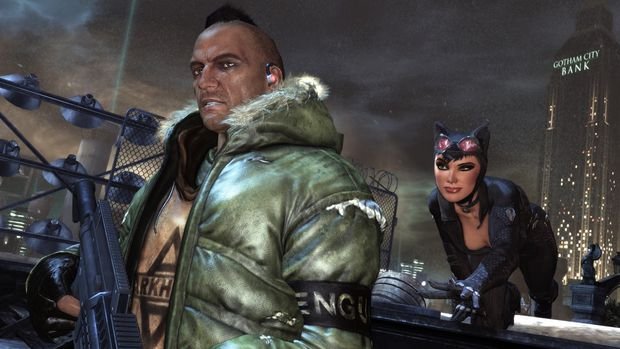 Heading deeper into the sewer, we next see Catoman’s stealth abilities. While she can go into and peek from behind cover, her ability to crawl along ceilings (see again: Spider-Man) gives her an edge. She effortlessly and silently takes out the five guards patrolling the area. She quietly pickpockets a key card from a guard after dropping behind him from the ceiling above without a sound. Watching her in action is a treat: at one point she hangs down from her whip and chokes out a guard with her legs.

She finally accesses the vault and open a small brief. We don’t see what’s inside, however; it glows on her face, Pulp Fiction-style.

“Looks like this kitten’s got the cream,” she says, grinning.

What she’s procured remains a mystery, one we may have to wait until Batman: Arkham City ships on October 18 to find out more about. Ginn leaves us with a promise that’s more of a tease than anything else.

“I can absolutely guarantee you that Catwoman tries to take that contraband and escape Arkham City, and absolutely nothing awesome or totally unexpected happens,” he says, trying to hold back a smile. “That’s a guarantee from me to you.”