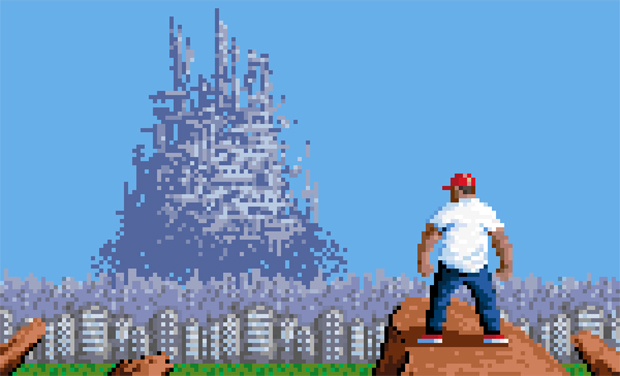 The teacher/rapper/hero known as MegaRan has gone back to his roots in more ways than one for his most recent release, with the help of rapper and producer Klopfenpop. For the eight-year anniversary of Random’s debut album, The Call, Ran recruited Klop to help bring back some of his classic, straight forward hiphop tracks with new 8-bit chiptune beats. The resulting mashup of old-school flavors is now available on Bandcamp, iTunes and Spotify, with a limited vinyl release on the way.

“I can’t believe this came out as well as it did,” Ran says in a recent press release. “These songs are completely new to me, it’s really inspiring…revisiting them in this way shines a new light on some of my old favorites.” To which Klop agrees: “Among other things, I hope this album is evidence that carefully crafted chip-hop can hold it’s own alongside straight hip-hop in any context.”

The Bandcamp release features bonus tracks as well, including Klopfenpop’s cover of the Partners In Kryme song from the first Teenage Mutant Ninja Turtles movie soundtrack, T.U.R.T.L.E. Power, which was my first exposure a few years ago to both Klop and Random. While there may not be as many gaming references in this release as more recent MegaRan tracks, it’s certainly a great mix for fans of chiptunes and Philly-based hiphop.