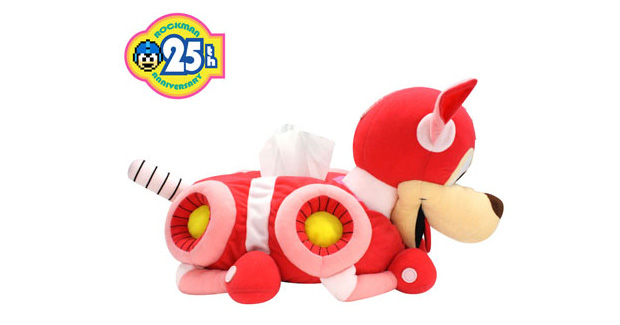 Little buddy, what have they done to you?

Amidst Capcom’s schemes to appease us with Mega Man-themed paraphernalia in the absence of an actual game announcement, I’ve more or less remained as reserved as could be. When Mega Man Xbox Avatars appeared, I kept my mouth shut. When Mega Man laptop designs were tossed about, I let but the tiniest shred of disdain peer through. When a Classic Mega Man and Mega Man X statue was unveiled, I… actually, that one was pretty cool.

But leave Rush alone! What did he ever do to you!?

The Japanese e-Capcom store has posted a listing for a Rush tissue box pouch, scheduled for release this September at ¥4800 (~$48). For a plush pouch with a slit in which to insert store-bought tissue boxes. So you can wipe away the tears of regret after you realize you spent almost 50 bones on the soulless chassis of a once-faithful companion, hallowed out to serve as a dispenser of snot rags.

You heartless monsters! Why couldn’t you do this to Eddie instead!? At least he’s already designed for such a purpose, as demeaning as it may be!