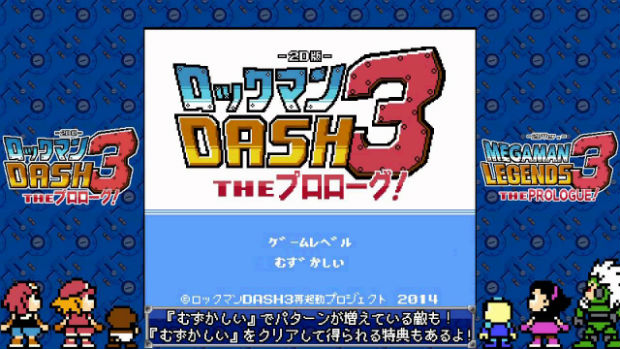 Mega Man Legends 3 may be cancelled, but fans have worked tirelessly to create a fangame based on the concept. Created as a prologue to Legends 3, this 8-bit release walks you through what might have happened, with great gameplay to boot. You can grab it right here (type “dash3” in the info box then download), or here if the source is down.

Having played it, I can safely say it’s pretty good! It feels like a classic Mega Man game with a few extra caveats that allow it to have its own style, which allow new protagonist Barrett to really shine. First, there’s the “roll” button, which lets you tumble in the direction you’re facing and avoid damage for a second with a true invincibility frame. It’s a cool idea and “dodging” in an 8-bit game still feels natural, especially during mini-boss fights.

Next, you also have a special meter that can be used to instantly fire off a charged shot at the cost of some meter, or use a more damaging (and risky) jumping kick akin to a Street Fighter game. You can also use said kick to fly up in the air and get a higher jump, which adds to its utility. Since you aren’t overwhelmed with a ton of sub-weapons with varying effectiveness, it’s up to you to really decide when to use your meter, which adds a lot of strategy to the mix while keeping things simple.

The actual levels are very short, but well designed. Barrett can climb up ledges, dash, and dash-run across gaps, which also give off a more Mario feel. It’s 8-bit, yes, but it truly advances the formula to the point where I’d love to see a Mega Man 11 from this same team.

Go check it out!