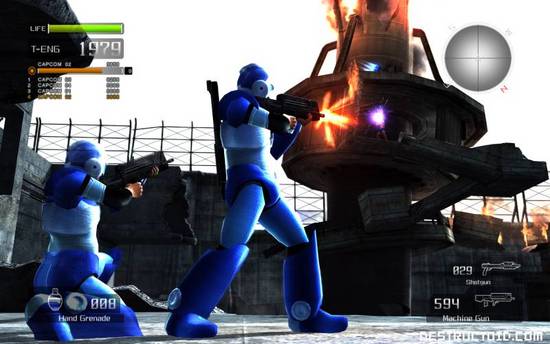 You have to hand it to Capcom — their support of Lost Planet, both on the Xbox 360 and the PC, has been nothing short of astonishing. Adding to the already available bevy of content, Capcom has announced new playable characters and maps for the PC version of Lost Planet.

New characters will be available in the form of a July 20th automatic updated and will include: Frank West (in his underwear, apparently) from Dead Rising, Joe from Lost Planet‘s single-player campaign, and — are you sitting down? — Mega Man. The download will also add new gameplay view modes, including a Resident Evil 4-style behind the shoulder view, and a new “Wide” view option. Additionally (yes, there’s more), multiplayer mode has been updated with a list of connected players for quick viewing, and a movie mode has been added that will allow players to watch all of the in-game story cut scenes from start to finish.

But wait, I’m not done yet — Capcom are also throwing in a free PC Map Pack #1 download on the same day, including “Radar Field,” “Island 902,” “Trial Point” and “Hive Complex.” These four maps are already available to Xbox 360 users (not for free, as of right now) in the form of Map Pack #1 and Map Pack #2. On July 20th, these maps will become free, and a patch addressing connectivity issues is also set to hit around month’s end.

Right now is about the time Lost Planet players should be kissing Capcom’s a**. Go on — I’ll wait here.