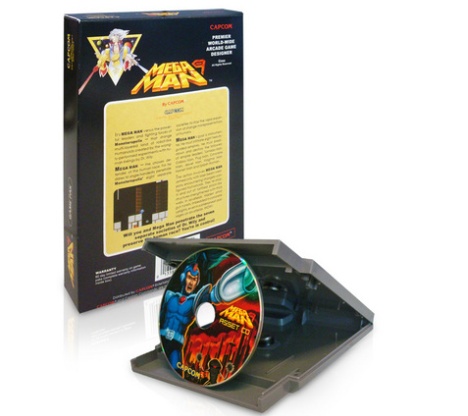 Remember the other day when I first saw pictures of this packaging for Mega Man 9 and I said that I was going to sit in Nick Chester’s bushes and attack the UPS man? I guess I can head home now (I’ve been nestled under this prickly bush leeching Chester’s Wi-Fi), because the Capcom Unity blog dropped a hint that some of these will actually be sold through the Capcom store … in limited quantity.

In the original post about the packaging, a limited run off “200 or so” was mentioned, but we have no hardcore details about when they will actually go on sale or what the actual number available will be. From the comments on the article:

Folks, here’s the thing. The number is so limited because they’re actually making the disc case out of an ACTUAL old NES cart! There aren’t really thousands of those lying around for them to gut and relabel. However, that being said, mayhaps some arrangement can come about where one can mail an old cart to CAPCOM with the payment for this fine packaging, and one can receive this glorious package back…. ?

Perhaps that’s just an idea, but if it’s an idea you like the sound of, go to the Capcom Unity blog and say so. I know I have tons of NES carts to spare, and it’d certainly be no heartbreak to give one up to get this in return. Make your voice heard! Otherwise, there’s sure to be bloodshed over the ultra-limited number of these available, and that could get really, really ugly.