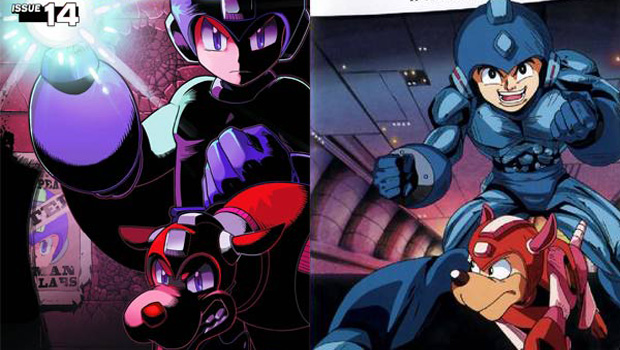 After the current Mega Man 2 story arc is complete, the Archie Mega Man series will be taking a break from game adaptations to do a little world-building. The newest arc, “Spiritus ex Machina,” will mark the comic appearance of Dr. Cossack and Pharaoh Man, introduce a new character named Dr. LaLinde, and incorporate elements from the Japan-exclusive Super Adventure Rockman.

In issue #14, an extremist group called Emerald Spears is causing trouble for Mega, so he must team up with Elec Man, Pharaoh Man, and original Robot Master Quake Woman to combat the threat. “Emerald Spears” is obviously a nod to Ruby-Spears, the studio responsible for the 90s Mega Man cartoon. Fittingly, the cover of the issue evokes a similar hardcore art style as the show’s promotional art. Rush looks even more rabid on the comic cover, though the TV Mega still wins out for having those ridiculous abs.

On an semi-unrelated note, our buddies at The Mega Man Network recently held a contest to award one lucky reader with a D-Arts figure inspired by the Japanese Mega Man X manga. The grand prize entry was a sculpted scene in which X cries over the death of a little girl’s dog — it’s supposed to be serious, but the distraught look on X’s face is too funny. You can check that in the gallery as well.