In my heart of hearts, Nintendo Power will never die. If you were an American Nintendo gamer in the late ’80s to early ’90s, this monthly rag granted you unfettered access to a world of insider news and gossip that made you the envy of every schoolyard game jockey. The magazine itself may be gone, but its legacy is immortal.

Over the course of nearly 25 years, a number of features and events inside and outside the pages of Power became legendary — the Super Mario and A Link to the Past comics, the Star Fox 64 promotional VHS, EarthBound‘s literally stinky ad campaign. But among the most infamous was the ill-fated The Mask II Player’s Poll Contest.

In Vol. 77, published in October 1995, Nintendo offered one lucky winner a spot as an extra in the sequel to the smash hit action comedy The Mask. Production on the movie was halted indefinitely after Jim Carrey declined to reprise his role, which also meant that whoever won the contest was boned. The Nintendo Power editorial staff did eventually deliver a public apology… in the final issue. What happened in the 17 intervening years? Was the winner awarded an appropriate consolation prize, or did the Big N leave the kid high and dry?

Well, why don’t I just ask him directly? 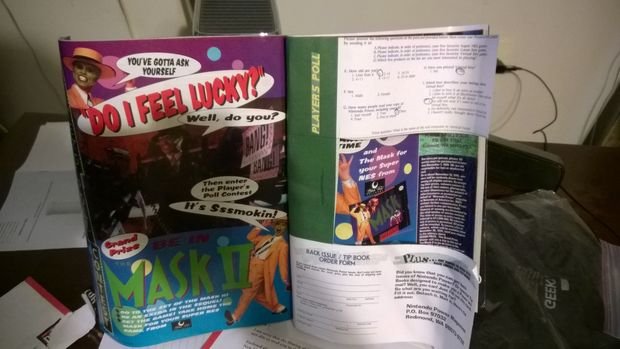 The contest page with the Nathan’s entry form cut out.

Meet Nathan Ryan Runk from Arbutus, MD. He entered and won that The Mask II contest, and despite never getting the chance to share the screen with Mr. Ace Ventura, he’s pleased with how the whole matter was resolved.

It was pure luck that brought Nathan, then 12 years old, into the winner’s circle. “I actually rarely entered any contests in Nintendo Power,” he explains. “I entered maybe about a dozen in the seven or so years of having a subscription. I only entered ones that really appealed to me, and, being a preteen in the mid-’90s, anything Jim Carrey OBVIOUSLY was appealing.”

Nathan was notified of his victory within a month or two, and afterwards, Nintendo would call him up every few months to keep him informed of new developments. Fun fact: The lady who kept in contact with him was Leslie Swan, former managing editor for Nintendo Power and current localization director for Nintendo of America, though she is better known to most of you as the voice of Princess Peach in Super Mario 64. 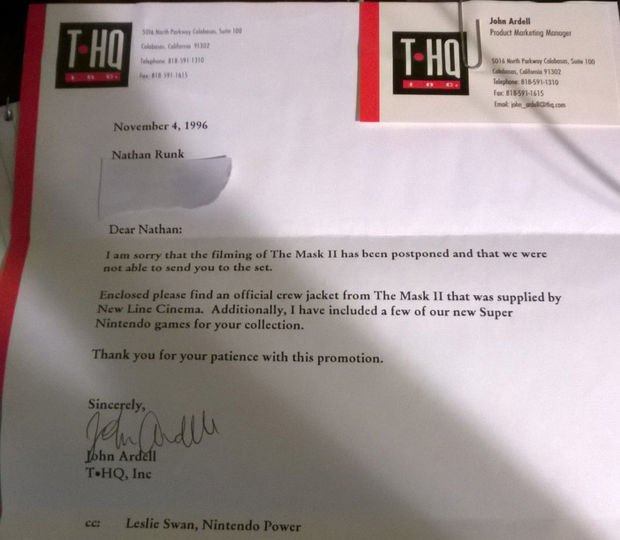 When it was clear that the movie wasn’t happening, Nathan was properly taken care of. Above is a letter sent to him on November 4, 1996, from product marketing manager John Ardell of THQ, which published The Mask SNES videogame under the Black Pearl Software label and partnered with Nintendo for this contest. The letter reads:

I am sorry that the filming of The Mask II has been postponed and that we were not able to send you to the set.

Enclosed please find an official crew jacket from The Mask II that was supplied by New Line Cinema. Additionally, I have included a few of our new Super Nintendo games for your collection.

Thank you for your patience with this promotion.

On top of the jacket, which Nathan sadly can’t find anymore, and the box of games, which of course included the original The Mask, Nathan also emerged from the deal with a cool $5,000 (the estimated value of the prize package, according to the official contest rules). As he remembers, “They gave me the option to wait indefinitely or take the cash… I took the cash. Absolutely the right call! Also, when I was on the phone with the people from Nintendo, they asked me if there was anything else that I really wanted. I said that I had just recently gotten an N64 and really wanted Pilotwings 64 (loved the original). In less than a week, I received that with the check.”

As we are well aware, a pseudo-sequel called Son of the Mask eventually released in 2005. There’s no telling if all involved parties would have honored the contest had Nathan not taken the check that day, but it’s all for the best. “I would have likely been okay with doing a walk-on in Son of the Mask because, at the time, I didn’t know how bad it was going to be. Knowing what I do now and even if that were an option, I’m glad I went with the money.” 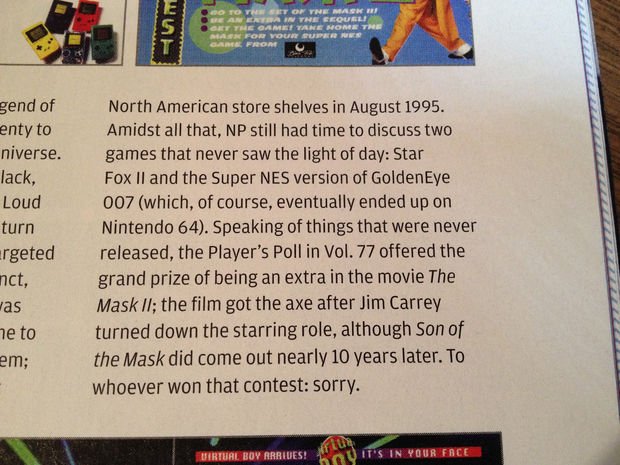 So if everything turned out rosy, why did Nintendo keep quiet about the fate of the contest this whole time? No one knows for certain, but as Nathan theorizes, “[T]hey don’t want to be viewed as having ever let their fan base down, which I completely understand. Printing that shows that they failed one of their subscribers (even though they didn’t) and it might erode the validity of their contest, even though that would be undeserved. Nintendo has earned the reputation of being a ‘good’ company, something that I feel is nearly impossible to do.”

These days, Nathan lives with his wife a short drive away from his childhood home. He’s not as huge a gamer as he once was — he used to be extremely into the XBAND modem and used the handle “King Gorth” — but he still makes a time for rounds of Mario Kart 8 and the like.

And with that, we finally have closure on one of the weirder events in Nintendo Power history. Nathan didn’t get his big Hollywood break, but he did make out like a bandit, and that ought to put a smile on everyone’s faces. Nathan’s smile is probably a bit bigger than most, what with his being treated like a king for the better part of a year. 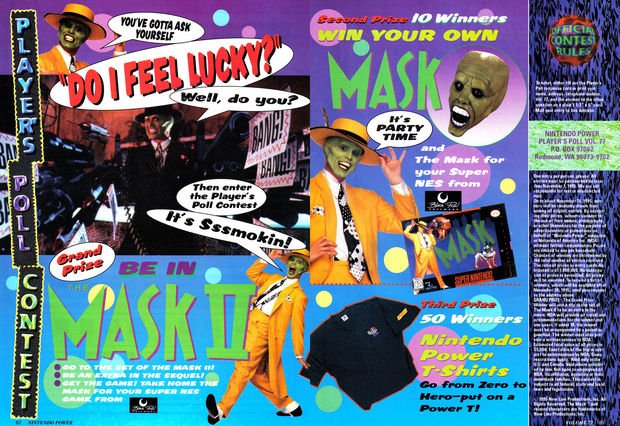 I’ll leave you with Nathan’s thoughts regarding Nintendo Power‘s closure: “It’s a bit sad whenever something from your childhood goes away. It was like that store that you really used to like but hadn’t been to in years that ‘suddenly’ closes down. It’s a bit of nostalgia that kids nowadays will know nothing about, and that, I think, is the worst part.

“My subscription ended in 1999 (still have all my back issues), so when it all ended, I wasn’t surprised. I had stopped caring as much, as had most people around me. I was the last of my friends to have a subscription. I really don’t think my situation was an isolated incident. But for those of us who had a subscription, it was a magical experience. Every month, you had the inside edge on all the newest games. You could get your friends through any level, find all the secrets and know all the codes. There was no YouTube, no Wiki, no walkthrough. You had to have the Power.

“And then, one day, the Power went out.”