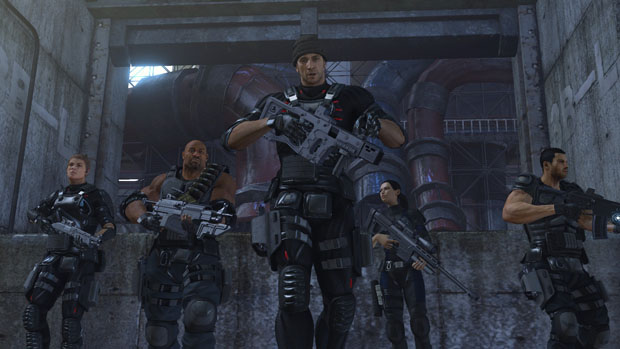 [This is the second in a series of exclusive guest blogs from the development team at Yakuza Studio on Binary Domain. Script writer Tsuhoshi Furuta and Art Director Nobuaki Mitake detail the characters of Binary Domain and their different personalities, as well as the thought that went into crafting their visuals. Binary Domain will be out on February 28 on the PlayStation 3 and Xbox 360. Stay tuned to Destructoid for more guest blogs up to the release!]

In Binary Domain, you play as Sergeant Dan Marshall. He is an ex-US Army officer that has joined the “Rust Crew”, a covert operation troop that works to crack down on violations against the Geneva Code. Dan is a very experienced agent and he is quite well known for his nickname “The Survivor”. He has absolutely no compassion for robots. On the other hand, he often jokes around with his teammates, in spite of being in a savage world of ruins and slums with constant threats from the rising sea level. In fact, the more dangerous the situation they’re in, the more he likes to joke around – which isn’t always a happy thing for his teammates.

The Rust Crew is an international Special Forces unit consisting of a variety of members. First we have Big Bo. Another ex-US Army officer, he is Dan’s partner both in battle and in jokes (no wonder Dan gets carried away so easily). We also have a few ex-MI6 agents from the UK: Charlie and the mighty lady Rachel. Faye Lee from China also joins the squad at an early point in the game.

The Rust Crew belongs to an international organization called the IRTA (International Robotics Technology Association), so the squad members consist of multiple nationalities, allowing them to make fair judgments during operations. The agents chosen for this occasion are the elite members of Rust Crew, but having never worked together, they meet each other for the first time after they enter Japan. Each of them has pride for their country and reputations of their own, so they are more rivals than happy teammates initially. When it comes to Dan, he’s widely known for his “Survivor” nickname, so there are members that try him to see how good he is. Now you’ll be playing as Dan, so if your skills are not good enough, they could get disappointed and start disrespecting you.

You’ve got to be especially careful with Faye. She’s a very talented agent so if you act like a wimp she will look down on you with her cold eyes. (…then again, I won’t stop you if you enjoy that.)

Mid-way through the game, you’ll also have Cain join the Rust Crew. He is a special ops robot from France, a sleek character with a French accent. He’s also capable of showing some “artificial humor”, but his jokes aren’t always great and don’t always come at the right time. But when it comes to battle, Cain will show great talent. His combat skills and technical skills (he can hack into enemy AI!) are so awesome, even the robot-hater Dan gets impressed. I’m sure you’ll love Cain for his humorous actions! 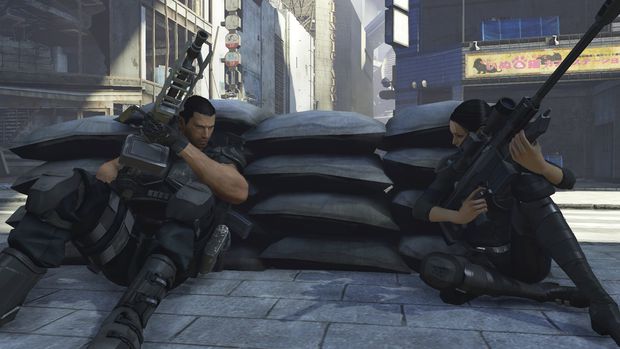 The Rust Crew members in Binary Domain are of different nationalities and races. We considered both Asian and Western characters and varied their visuals.

Binary Domain focuses on communication between the player and ally NPCs so we set realistic personalities and behaviors for each character. Big Bo jokes around with Dan, but is more careful and acts rationally. Charlie is solid, proud, and afraid of making mistakes because he is the leader of the squad. The player will spend a lot of time with these characters and their complicated personalities, so we created character designs with clearly different visuals.

Cain, a member of the Rust Crew, is a robot. All the enemies are robots and we couldn’t make him alone look like a robot from another world, so we were very careful to make him look right as an “ally” robot. We needed to create him in the same taste as the enemies but with some arrangements to show he is on our side – without breaking the rules of the game world. We had a lot of difficulties making him into a unique character between the line of friend and foe. We added a bit of alien elements while giving personalities to his design and motions to make him a bit closer to human.

Along with the characters, the game features a wide variety of enemy robots. Not only humanoids, but also numerous variations of robots will appear in the game, such as a huge spider, gorilla, dog, etc. Creating varied robots required us to create unique motions corresponding to each robot, but focusing on robot variations was very meaningful because “procedural damage” is one of the great features of Binary Domain. 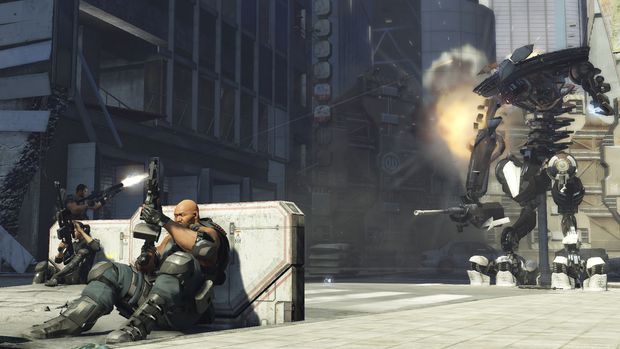 The key feature would not be enough without achieving both the iron defense of enemy robots and the exhilaration of destroying them. We needed to create animations for each situation, such as robots with their legs busted crawling on their hands or those with their head busted becoming unable to recognize friend from foe. We repeated quite a lot of trial and error to get these movements in ideal shape.

In the end, our efforts were well rewarded and the animation controls of destroyed robots became one of the main features of the game. You’ll surely be pleased with the satisfaction you get by destroying them. Try to destroy them from different parts of the body and enjoy the reaction of the enemy.