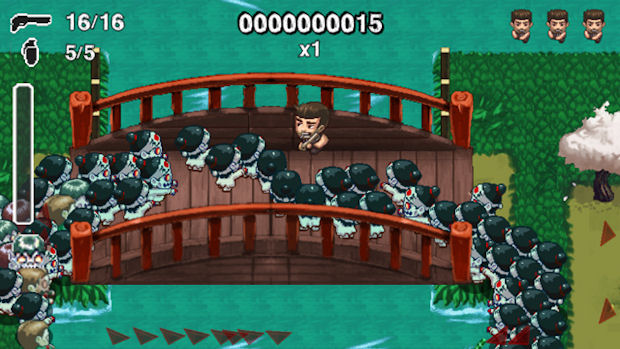 Halfbrick, the studio responsible for putting Mr. Destructoid in Raskulls, has announced a brand new shooter for the PSP Minis service. Age of Zombies is a time-traveling undead genocidal romp in which Barry Steakfries slaughters countless ghouls in period dress.

It’s $4.99 and looks like a laugh. Check out the video and screens for more, and hit the jump for a rather amusing press release from the Aussie studio. Also, zombie T-Rex. How is that not rather awesome?

We at Halfbrick are very happy to announce Age of Zombies – Rated T for TEEN – for the PSP and PS3 minis. We know what you are thinking – “Great, another %@&$in zombie game!”

We thought about that too. After years of research at the Halfbrick Researchalogical Datafiler Department, our team discovered a unique formula which determined that:

There’s no denying it. Zombie games make money. No one has anything against a good zombie game really, it’s just that there’s a lot of them. So we needed to try something different. We didn’t want to kill zombies in the usual way. We didn’t want to survive a deadly undead army in the ruins of some scary-ass town. We wanted to travel through time and shoot zombie dinosaurs and mummies and junk. So, we created Age of Zombies!

To conduct field research, the development team actually journeyed back in time to experience what it meant to really blast zombie faces with guns while standing around the Pyramids and Japanese villages and such.

Mr. Morowitz, the game’s lead programmer, found the entire experience fascinating:“I particularly enjoyed the artwork of the Ancient Egyptians and their ability to persevere under extreme environmental circumstances.”

Creative consultant Anthony Hansen on his adventure: “I learned how to make moonshine in the 1930s.”

Truly an enlightening experience for the entire team! Upon returning to 2010, Halfbrick set about creating Age of Zombies, where the hero Barry Steakfries employs the use of time portals to stop the evil zombie scheme of Professor Brains. Using a huge pile of weapons and explosives, Steakfries is the real deal for blood-splattering needs.