When people say “educational game” I instinctively clench up. I was raised in the heyday of Canadian educational software, with all the impenetrable geography-teaching trucking simulators and embarrassingly stilted STD/drug awareness adventure games you could ever stand to play. But Mecha Trigger, developed by the game design and development specialization at Michigan State University is a different breed of learning-game.

It glides in stealth bomber style, undetected by the alarm systems and internal klaxons that normally weed out Mavis Beacon and her ilk by dressing up its lesson-work under the guise of giant robots blowing the shit out of each other.

As far as disguises go, it’s hard to do better. 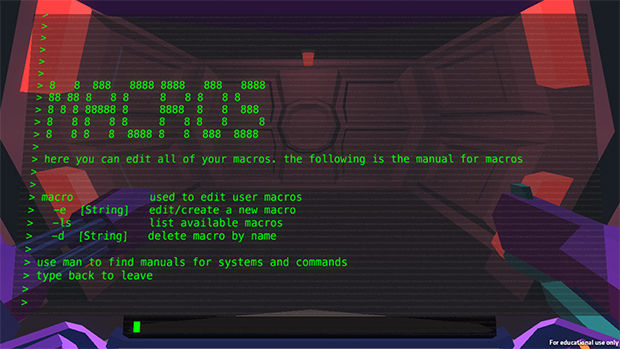 Mecha Trigger delivers an insidious two-stage payload of knowledge. At first it may seem like another typing-trainer-by-way-of-game kind of a deal, a Typing of the Mech if you will. While the threat of being skewered by a railgun the size of a city bus is a pretty good motivator to learn how to type quickly and accurately, the real core of what Mecha Triggeris teaching is actually the rock-bottom basics of coding and scripting.

There are no such things as joysticks or control pads in the world of Mecha Trigger. And while you use a keyboard to control your TypeFighter mech, the secrets of WASD have never been revealed to the engineers who made these giant robots. Instead, every single action your mech makes needs to be typed into a DOS style command line.

Want to walk forward? You need to specifically type out (with proper spelling and format) the code to move your legs and the distance you want to travel. “legs move -d 10” for a few short lurching steps. An enemy to your right is pelting you with a mech-sized shotgun? Better type in “legs turn -a 90” to face right and look at him (you’d type in “legs turn -a -90” to look to the left), and so on.

If this already seems like a huge pain in the ass, you have no idea how bad it really is. I only got to play with Steel Battalion’s infamous twin-stick, 40-plus button control surface once at a kiosk that was displaying it like some novelty act, and it was infinitely easier to grok. Even with that massive layout, there was the comforting familiarity of triggers and peddles, and when you pushed a button, while the mech might not have done what you wanted it to do, it did something. The command line prompt gives you nothing. Mistype a line, use the wrong format, whatever, and the mech remains stubbornly, perfectly, inert. Incredibly frustrating, especially when you’re being picked apart by enemy fire.

Even after reviewing the tutorial, I still managed to forget important commands — like say the ones for controlling your guns and laser cannons — in the heat of battle. The first time I actually managed to shoot something, my machine gun farted out a single impotent shot. Clearly there was room for improvement.

Fortunately, you can create your own custom macros in the game that can activate a command with much fewer button presses, or even carry out multiple actions. This quickly reveals itself as the holy guts of the game. After a bit of fussing around I wrote scripts that would fire my laser beam for a nice controlled 2 second burn, or one that would empty my machine gun clip and automatically reload it. I destroyed an A.I mech or two, things start to click.

For the first time in a long while, I go and grab a pen and jot down some notes. Any time a game makes me break out the ol’ yellow legal pad, it’s a sure sign of a burgeoning obsession, or at least a brief but intense infatuation. Soon I have a page full of abbreviate commands and reminders. I have my weapons figured out, I even come up with (what I think was) a fairly clever script to automatically switch to the cloaking device and activate it for emergencies.

I’m no ballerina, but I’ve wrangled the controls enough to generally trundle my mech where I want to go. I can scan the enemy, get within optimal range, and unleash a holy rain of – oh wait, he activated his jump jets. How the fuck do I look up again?

More notes, more macros. Over an evening of play, I slowly stumble my way towards something resembling competency. I create a slew of macros — basic controls, weapon systems, responses to every typical situation I can think of. I try them out in the field, find holes in my battle-vocabulary and fill them. I streamline the commands that work by trimming down unnecessary keystrokes, shortening command lines to as few button presses as possible.

I experiment and find out I can string more than two commands together in a single macro, instantly obsoleting more than half of the commands I’ve already written. I toss them out, rewrite them into tighter, more efficient, little bunches of code. My mech stops trudging about with a noticeable stutter-pause between every action, and soon I’m moving around about as smoothly as a multistory death-robot can. The process of writing macros and the logic of the game becomes so familiar that I start writing the occasional script in the middle of a fight whenever I notice something I’m missing or have an idea that would speed things up. 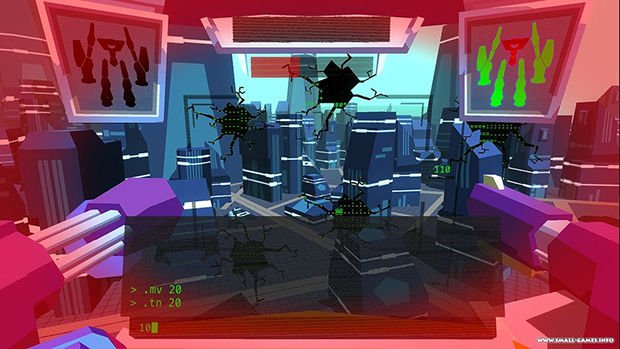 I’m embarrassed to admit it, because I know writing macros is the most basic kind of scripting imaginable, but a thought occurs to me. “Is this how developers feel when they really understand the tools they work with? When instead of doing some menial task by hand they hack in a clever little line of code that does it for them?”

I remember how Rock Band, with its simplified five button plastic guitar, gave you that little glimmer of understanding of what it’s like to actually play an instrument when you got into the zone. Mecha Trigger is opening up the same conduits in my brain, but instead of a more nuanced appreciation of bass-lines and chord structure, its giving me a peek into the world of development. Just a tiny bit, a crack in the door with a weak beam of light spilling through. This is the most surface-level simple stuff, but for me, a guy who has never even considered writing a line of code in his life, it’s like learning the first few words of a new language.

It left me wanting more. What if I could write a script that could respond appropriately to different contexts? What if I instead of having to build my mechs around my scripts, my scripts could work with my mechs, allowing me to change up the equipment without having to write up an entirely new group of macros? These are questions the developers probably hoped people would have after playing. Sneaky bastards, teaching me things.

Even if you don’t feel Mecha Trigger will inspire some new-found interest in scripting for you, it’s still worth checking out. It’s free, offers a very different way to play than conventional shooters, and there are always worse ways to spend a lazy evening than turning giant robots into scrap.