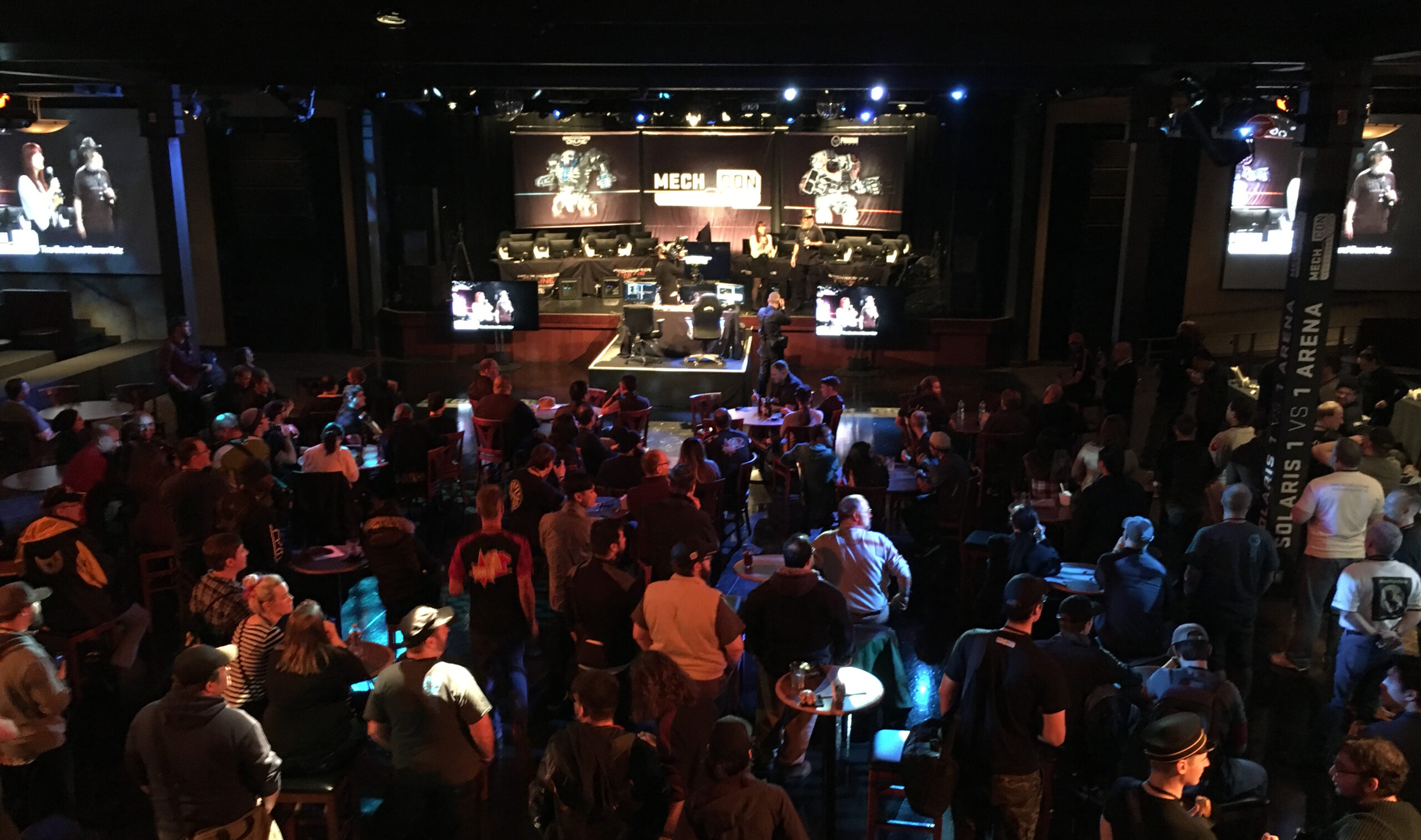 Friendships born on the battlefield

When I traveled to Vancouver last year to cover the Steam launch event for MechWarrior Online, I was surprised when Piranha Games also took the opportunity to announce the launch of the 2016 MechWarrior World Championship. A six-month-long bracketed tournament featuring dozens of teams across three separate geographic divisions (the Americas, Europe and Africa, as well as Asia and Oceanic) seeded with a $100K prize pool that grew to $143,490 through the sale of player-purchased sponsor packs by the time the last three teams remaining were ready to compete. It seemed ambitious. Maybe even overly optimistic.

As an MWO veteran since the first days of open beta, I was personally excited at the prospect of watching the best of the best mechwarriors slug it out in their favorite giant stompy robots for glory and spoils. The Solaris VII arena made real. But, even during the hype and fervor of the announcement, I had my doubts the game would find a wider eSports audience. MechWarrior, as joyfully complicated, finicky, and granular as it is, always seemed like a difficult sell for anyone who wasn’t already fully committed to the nitty-gritty of battlemech combat.

This weekend I again traveled to Vancouver for the first annual Mech_Con to watch the grand finals of the tournament and witness the final thunderous shots that would decide the winners. Now that the dust has settled, I still don’t think MWO is destined to become an eSports phenomenon. But, I’m also positive that doesn’t matter to the competing teams and hundreds of fans who also made it out to the event and all the rest watching on stream. For them, it isn’t about eSports glitz, personal fame, or even the prize money – it’s all about the community. 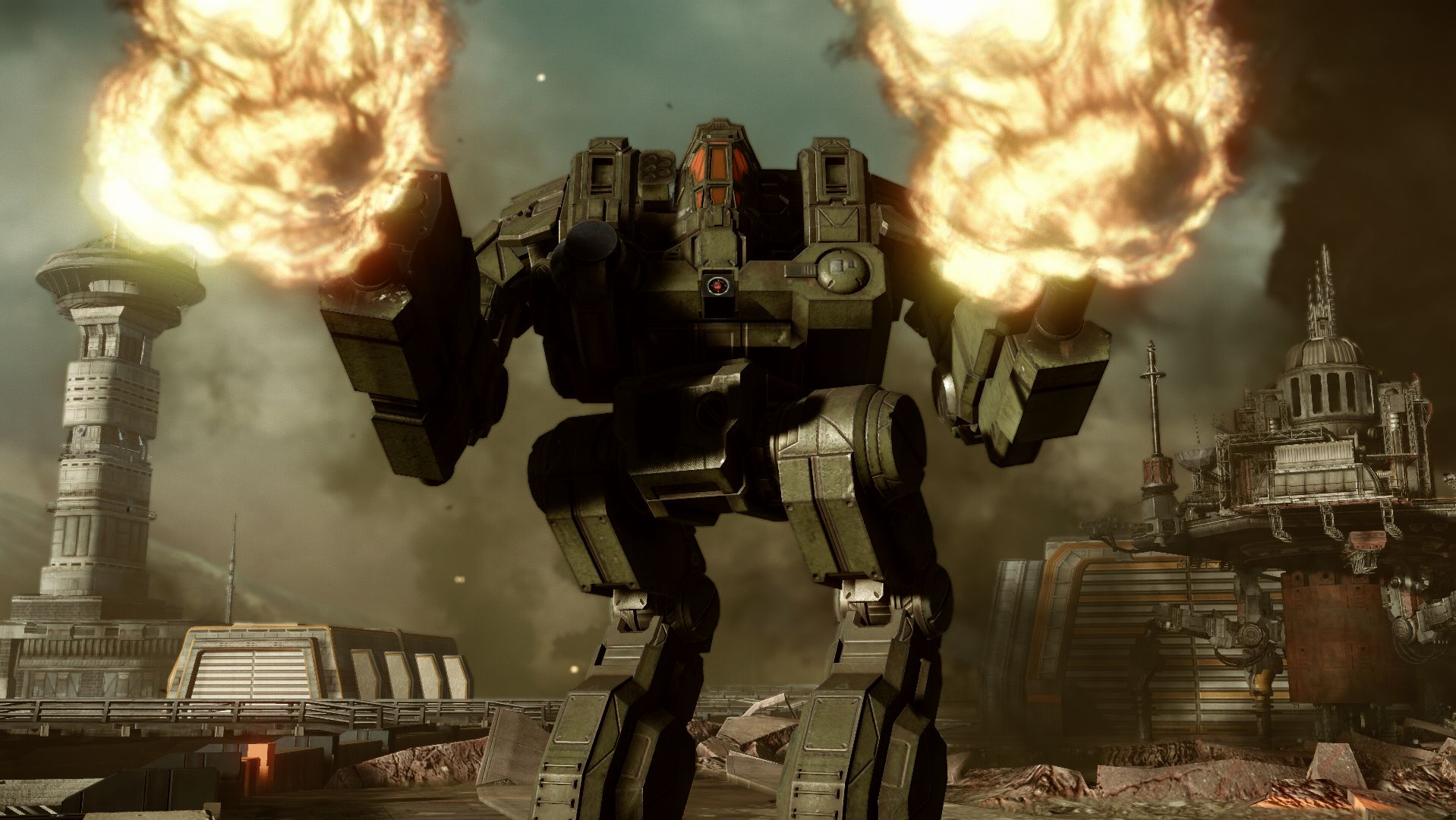 The chief focus of Mech_Con was of course the 2016 MechWarrior World Championship, but the tournament was far from the only attraction. Catalyst Game Labs, the studio behind the tabletop game, was there holding impromptu battles with dice and miniatures and had demonstrations of professional model painting. Famous mech artists like Alex Iglesias (the man behind the gorgeous concept art and redesigns of the mechs as seen in MWO) were on-site signing autographs. Even BattleTech luminaries such as Jordan Weissman, creator of the original tabletop, and his longtime collaborator Mitch Gitelman, now the current heads behind Harebrained Schemes and the Kickstarter-funded BattleTech revamp in development, were there, demoing the latest build of the game and shaking hands.

The vibe in the room was less of a bloodthirsty mob come to see giant robots tear each other limb from limb, and more like a chill reunion. Lots of hugs, people swapping merchandise and little gifts, and getting sloppy drunk while debating the merits of stacking large pulse lasers on high shoulder mounts as opposed to PPCs. Conversations spoken in a language only those who have spent a significant time living in the franchise could hope to penetrate.

The tournament games were spread throughout the afternoon and evening, a genteel pace that allowed for plenty of mixing, demoing, and hanging out, even for the teams gunning for the prize. I had a chance to sit down with the two team captains of the 228th Wild Ones, the team representing the Oceanic region, Joe Emmert and Jacob Zatta. Joe and Jacob are an interesting pair, with Joe being the oldest member of the team and Jacob the youngest. They represent both the established core fanbase of the BattleTech/MechWarrior franchise and its future trajectory. 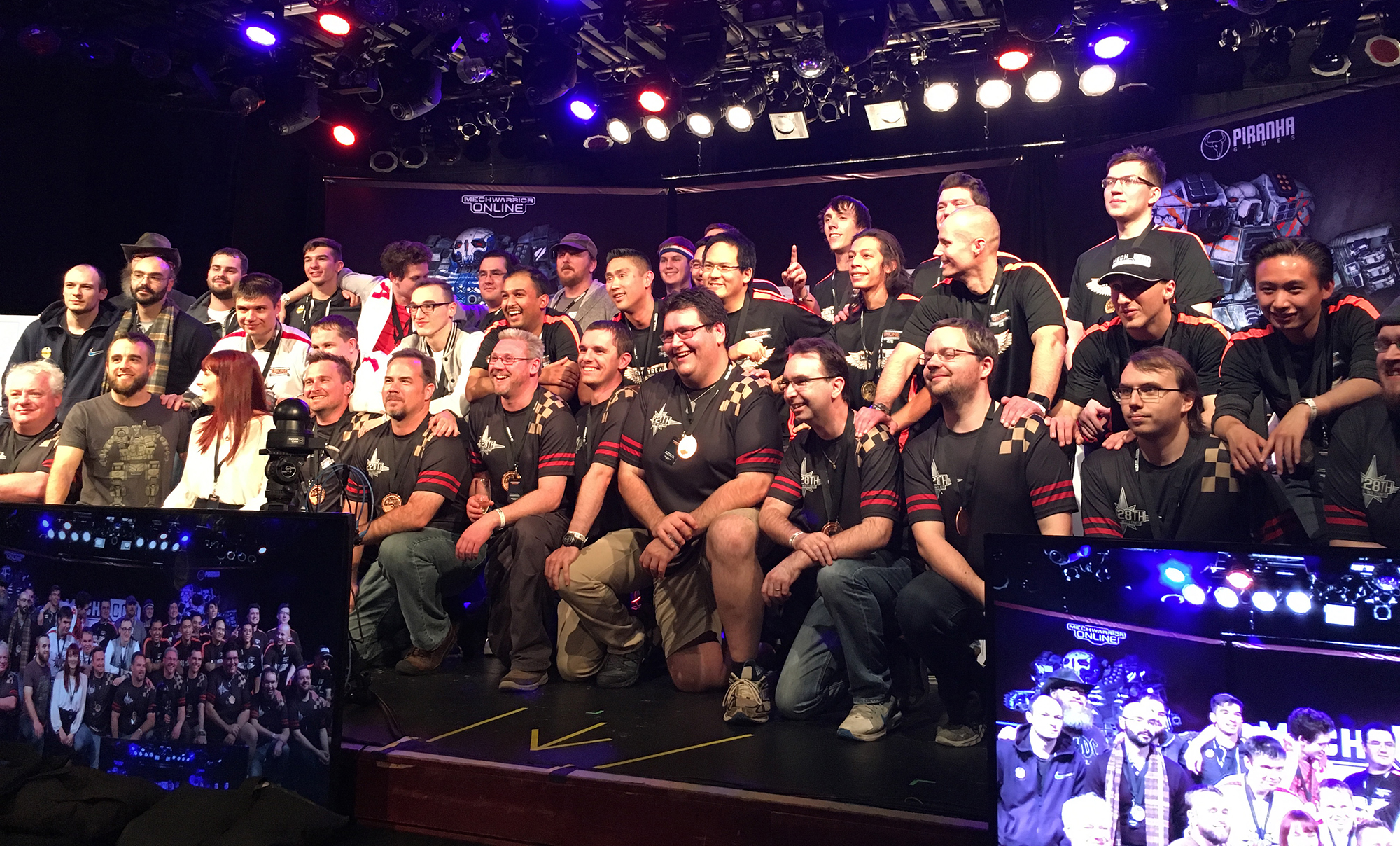 Spend enough time hanging around the forums and community sites for MWO and it doesn’t take long to realize the audience demographics for the franchise tend to skew a little older than most other titles. Finding a 40-year-old deep enough into a game like Call of Duty that he’ll hang around the forums and debate balance issues and DLC prices might be something of a rarity. But, in MWO, that’s par for the course. Many of the current fans of MWO came to the series decades ago through the MechWarrior games of the early and mid-’90s, or even earlier from the original BattleTech tabletop game of the ’80s. It’s a franchise built on nostalgia and respect for a rich background lore that encompasses 30 years worth of multiple video games, core rule books, and dozens of novels.

Joe, a 44 year old US naval officer, is every bit the typical longtime fan. He came to the series as a teenager, cutting his teeth on the original tabletop. When MechWarrior 4: Mercenaries came bundled in with a video card purchase, the rest was history. “I’ve played that game for probably 15 years now,” Joe mused, and he isn’t the only one. Many of the attendees I met came equipped with the CD-ROMs and jewel cases of their favorite classic games, ready to have them autographed. Everyone I chatted with mentioned they still dust the old titles off and play them again now, decades since their release.

Jacob however is a different story. A 24-year-old Australian with a background in engineering and robotics, he had no former interest in the franchise. “Of the people in my team, I’m probably the one with the least time in BattleTech,” he told me. “After I finished my university exams a few years ago, I just Googled ‘mech game’ and found it. I had never heard of MechWarrior of BattleTech before, but it looked cool, and it was free.” Always a plus when operating on a student budget.

Jacob might have given the game a shot because of his interest in robots and fiddling around with different builds and components, but what kept him invested was the people he met and friends he made while playing. Both Jacob and Joe agreed that one of the big incentives for them to win regionals and earn a shot at the grand finals wasn’t the allure of the prize money, but getting a chance to meet their fellow teammates in person and hang out. Despite the 228th finishing in third place, Jacob didn’t seem disappointed in the slightest. “Like I said to the guys before the match, we already won the prize we wanted to win. We got to travel overseas to play video games, and meet people we’ve known online for a year or more. That’s awesome.”

That commitment to the community was a recurring theme. In describing the rivalries that pushed them forward, Joe said “we wouldn’t be here without the competition we had. The guys from ISRC and SquadFoxtrot [two rival Oceanic teams] were great competitors the entire time.” While only one team from each region got to progress to the grand finals, there was still a sense that each team was working collaboratively to elevate the skill level and strategic depth across the community. 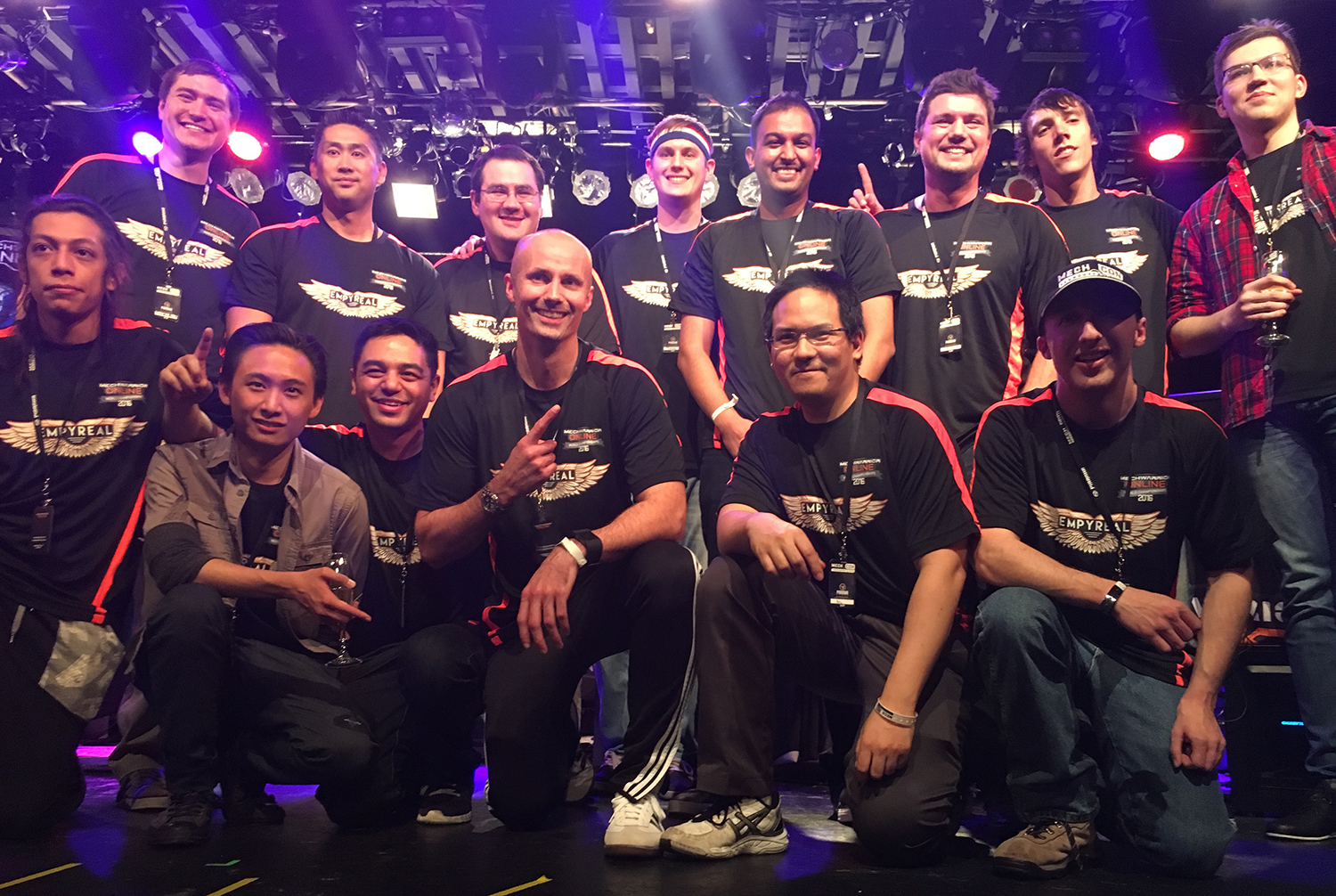 In the end, the tournament came down to the American team EmpyreaL, and EON Synergy representing the Europe and African region. The two teams squared off on center stage with the attention of the entire convention audience focused on the final series of matches that would determine a winner.

Despite efforts to make the game more spectator friendly, including color-coded teams, displayed health and mech status information, and a free-floating director’s camera that can pan and survey the battlefield at will, I’m still just not sure how well the game works from an audience perspective. When you’re in the cockpit and battling it out yourself, the streaking lasers and thudding auto-cannon impacts are meaty and exhilarating. Panned back and seen from a 3/4’s overhead perspective trying to capture every mech possible in the frame, it seems somehow clinical.

That detached sensation combined with a lack of comeback mechanics, or the potential for upsets when one team starts to trail behind, tends to deflate the excitement of many matches. The last of the night match in particular, the one you would hope would be the hardest fought and most exhilarating display of skill, devolved into a one-sided stompfest scant minutes into the match – the kind you’d see bemoaned in any ordinary pub game. As EON Synergy lost two, then three, then four mechs in the span of maybe a minute and a half, the die was cast, the foregone conclusion clear to everyone in the room.

But, if anyone else shared the same reservations I did, I couldn’t tell. For the hardcore fans in attendance, those concerns didn’t seem to matter. Everyone was cheering, and hollering, and making sloppy toasts by the end of it. And why not? They got what they wanted: a celebration of the world and games they love and a chance to watch giant robots blow each other up on the big screen. If MWO can continue to treat its core fanbase with care and capture the occasional new convert like Jacob, what else does it need?

As an eSport, MWO might never be huge – but it will be fun, and it will have a passionate, close-knit community that adores it. Maybe that’s enough.