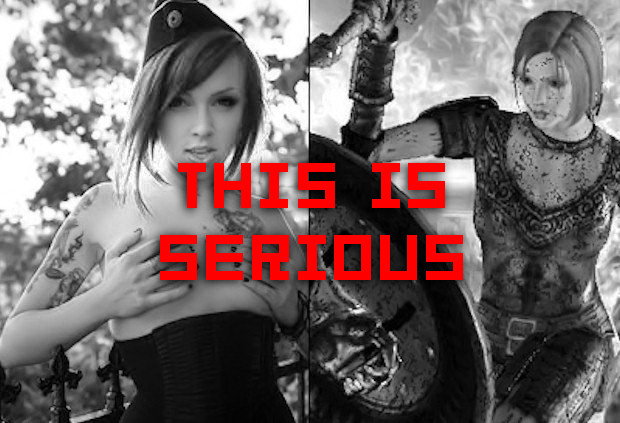 [It has come to my attention that the original incarnation of this story has angered some (not all of you are tools!) of the Reddit community for being too immature and not serious enough. Since we don’t want to upset thirty-year-old journalism fans (i.e, people who don’t normally read us anyway), we have decided to re-write the story in the serious and journalistic tone that it truly deserves. Apparently I am a journalist.]

Maxim is a monthly publication aimed toward young males across America and the United Kingdom. The magazine has an official Web site. A Web site is a collection of pages found on the Internet. This particular collection of pages contains an exclusive set of photographs that show the real-life inspirations behind several characters in the upcoming BioWare RPG (role playing game) Dragon Age: Origins.

The basic premise of Maxim‘s gallery is that the females are attractive to the target demographic of heterosexual young males, and that this should be celebrated. If you are a heterosexual male, you may feel physically and emotionally stimulated while looking at the images. That’s normal. A state of heightened arousal when viewing attractive members of the opposite sex is a healthy reaction. One might like to state one’s desire to perform an act of coitus with the females rendered. Again, this is a natural impulse.

If you might permit me a personal editorial opinion for a moment, my favorite of the females is a lady who has styled herself “Alleykatze,” a name that I suspect may not have been awarded her at birth. I shall of course follow up with Maxim‘s public relations staff to verify that the name is indeed a pseudonym, as my reporter’s instinct suggests. I prefer Alleykatze because her physical appearance possesses a variety of traits that I find sexually appealing. If I had the opportunity, I would like very much to court her.

Dragon Age: Origins is a videogame for the PC, Xbox 360 and PlayStation 3. It will be released on November 3, 2009, published by Electronic Arts. In other news, Citizen Kane.

[Publishers’s note: This statement is from Jim, as Destructoid.com issued a statement in the original Reddit comment complaints. For the record, Nick (our editor) or I (founding chump) may not agree with everything Jim publishes, but we support our guys to the death and are proud to be Jim’s faptastic publisher. We support a lot of different voices on Dtoid. To us that mix is more important than regulating a milder one as to not ruffle conservative panties. In summation, leave Britney alone! She is a person!  PS. If the Reddit complaint guy knew what community up-voting system is called he’d have kittens. Sexy kittens. -Niero]