This year is just ridiculous. There have been so many huge titles released in 2011 already and there are still many more on the way. I have a hard time trying to keep track of all them so you’ll forgive me if I haven’t really given much thought to the games of 2012.

That was until last week, when I got to see Max Payne 3 in action. As a fan of the series, I can easily say that fans have nothing to worry about when it comes to the next chapter in Max’s troubled life.

I’m first shown an early level, where I witness an older, more cynical, and distraught Max who is visibly haunted by the events of the first two Max Payne games. Otherwise, he looks like the Max you more or less remember (a head full of hair with a really bad taste in ties.) Several years have passed since the events of the last game and Max pretty much has nothing to live for. He’s just waiting for that bullet to the brain to end it all while abusing alcohol and painkillers.

Lucky for him, an old acquaintance from the police academy days, Raul Passos, offers him another chance: a job in the thriving field of executive security protection in Brazil. High-profile Brazilians are easy targets for kidnapping and being a bodyguard is a perfect job for an ex-cop like Max. 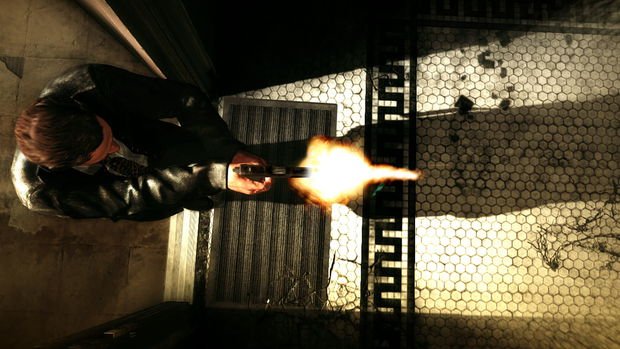 Max doesn’t have much time to think the proposal over, as Anthony DeMarco pays a visit to Max’s apartment in New Jersey. Max had just killed Anthony’s only son prior to meeting with Raul, and the prominent mobster has brought his whole crew with him to get revenge.

The game then seamlessly switches from cutscene to gameplay as Max and Raul try to escape the apartment with their lives. Some gangsters are already in the corridor on Max’s floor, but they don’t stand much of a chance as Max’s bullet-time kicks in. The Max Payne series started the whole bullet-time craze and it wouldn’t be a Max Payne game without it. I genuinely felt a wave of nostalgia when I first saw Max do his signature slow-motion dive while shooting off his gun.

Speaking of the slow-mo dive, I thought it was pretty cool when Rockstar demonstrated that Max can remain prone on the ground after a dive. In fact, you can roll Max onto his side or even on his belly. Aiming your weapons will be pretty fluid as you move your gun’s reticule all around no matter what your stance is. Rockstar promises that there will be multiple aiming methods to choose from to please different play styles — everything from complete free aim to some form of target locking. 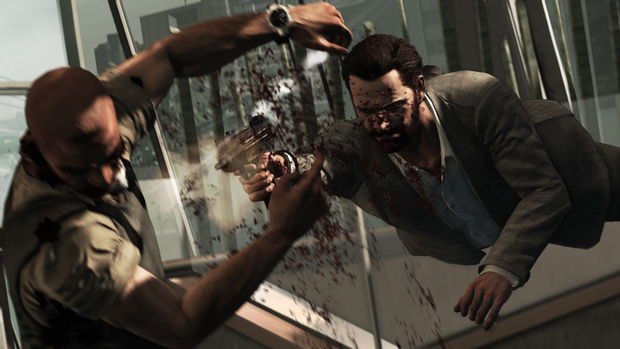 As Max rounds a corner, a cutscene begins in which we witness a mobster knock Max onto the ground and point a shotgun at our hero. Before he can pull the trigger, the mobster is gunned down by a crazy hobo who bursts out of his apartment. The Max Payne games have always had elements of the surreal, and this one won’t be any different. The hobo starts talking crazy hobo speak as he goes off to take on more mobsters down the hallway. Max gives chase and peeks around the corner to witness the hobo on his knees and surrounded by three mobsters. The hobo continues on with his crazy talk and finishes his sermon by uttering the phrase “cleanse in fire!” and detonates the bomb that was strapped around his waist.

From here, Rockstar guides Max into the hobo’s apartment, where he finds a bottle of painkillers. Max Payne 3 doesn’t use the regenerative health system that has become standard in games today, so you will need to find painkillers to fix yourself up. The bottom right of the screen shows a silhouette of Max that fills up with blood to show how much damage you’ve taken. You will also see a number within the silhouette to indicate how many bottles of painkillers you have. To the right of that is a meter that shows how much bullet-time you have and below that you will see how much ammo you have for your guns. 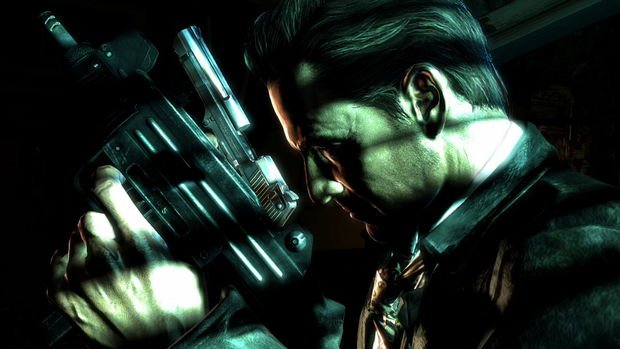 This section of the demo ends with Max exchanging fire through the windows of a hallway with gangsters on a roof across the street. Here I see both the cover mechanics in play and get a small taste of the game’s destructibility. First off, don’t worry about the game turning into some sort of cover-focused shooter. While you can shoot using cover by poking your head out or blind-firing, the focus is still on the run-and-gun mentality you would expect from Max Payne. Plus, the destructibility will prevent you from any sort of cover abuse — cover will get torn to shreds as more and more bullets are laid into it.

Max finally makes his way to the roof and ends the first part of the demo. Rockstar then takes me into a later part of the game where Max is in Brazil. Max has obviously taken the job offer from Raul and the pair work together to protect the Brancos, a wealthy Brazilian family with strong political and social ties to the city of São Paulo.

For the demo, we’re taken deeper into the game where a now bald-headed Max is on the run from a right-wing military group hunting him and Raul’s girlfriend, Giovanna, somewhere in São Paulo. The scene is first setup to the player in classic Max Payne noir fashion, but with a modern-day twist. As Max gives his monologue, we witness multiple camera angles displayed on the screen in the same way you would see it on an episode of 24. 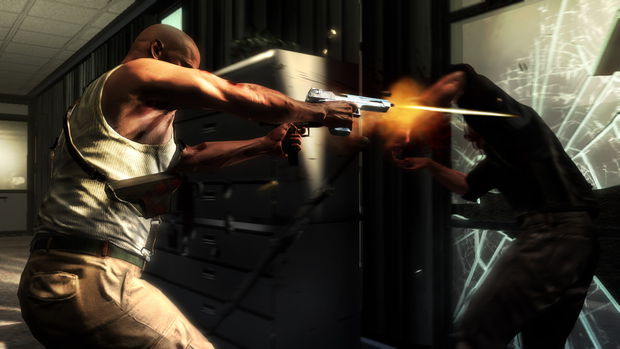 While watching this in-game cutscene, I couldn’t help but have goosebumps as I heard James McCaffrey lend his voice once again to the iconic character. Not only has James returned as the voice, but Rockstar felt James would be the perfect body actor and he did full motion-capture work for Max. In fact, all the characters in Max Payne 3 feature full-motion body capture. Hundreds of hours were spent in order to bring life-like characters to the game.

Sets were even built to scale in order to capture the in-game environments. So when you see Max and Giovanna in the next scene climb over some barricades into a bus depot in order to hide from the pursuing gang, you know that the motion-capture actors actually climbed over that obstacle in real life. Advancements to NaturalMotion’s Euphoria and the RAGE engines have given us some of the most detailed and realistic characters in a Rockstar game to date.

Max and Giovanna are catching their breath in a broken-down bus, but it doesn’t take long for a few of the gang members to start searching the area. The pair can hide within the bus, but eventually the gang will flush them out as they patrol the area. Enemies aren’t just brainless idiots and will use a variety of methods in order to take out Max. They can fire behind cover, use flanking tactics and so on. I really like the fact that you can’t understand what the enemies are saying — unless, of course, you speak Portuguese. As Max is a foreigner who doesn’t speak Portuguese, there won’t be any subtitles for the players when the language is spoken. 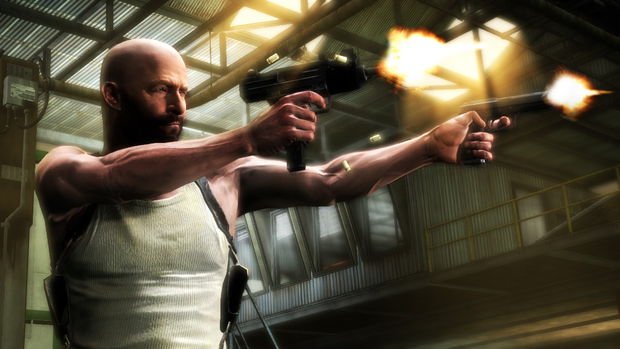 So Max takes care of the situation the only way he knows how. Once there’s only one guy left, the end of each of these encounters is marked by the camera switching to a slow-mo killcam perspective, which follows your bullets as they finish off the last guy. You have control over how fast or slow these killcams go, which is nice as I’m sure this will get old fast.

Each of these encounters, based on what I’ve seen at least, seems to be a pretty self-contained struggle. Once you’ve taken out the varying number of enemies in each encounter, a cutscene takes place moving the story forward before the next section’s firefight. If there’s one thing I can see that will bother players, it will be the constant switches from cutscene to gameplay.

Personally, I didn’t mind the regular breaks; I want to see the story, since that’s what is most important to me in a videogame. At the very least, the switch from cutscene to gameplay is pretty seamless and natural and won’t pull you out of the immersion too much. There was even a moment where I thought I was still witnessing a cutscene only to realize it was actual gameplay happening on the screen. It also helps that there are no load times from the start to finish of the game. 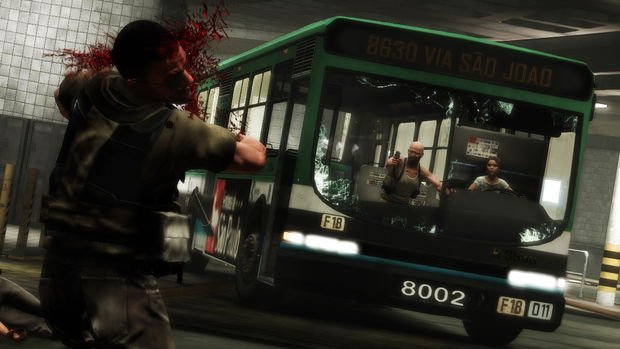 Watching Max and Giovanna work together in the cutscenes reminded me a lot of the relationship between Monkey and Trip from Enslaved: Odyssey to the West. Max would help Giovanna get through a fence or climb through a window in order to open up the pathway for Max. At the same time, Max would have to protect Giovanna in the gameplay sections. Don’t worry, you won’t be stuck doing any sort of babysitting duties. For the most part, Giovanna hangs back while you clear a room and there were just a few moments where Max had to come to her rescue.

Finally, the demo comes to an end with Max and Giovanna stealing a bus. While Giovanna struggles to drive the bus away from the gangs, the player is left to focus on shooting at the enemies. After several minutes, Giovanna loses control of the bus and plows into a building. The two survive and make a run for it just before the screen turns to black, ending the demo.

The only real concern I have at this point is in regards to the multiplayer. Rockstar wasn’t ready to talk specifics, but they did at least state that they feel that the multiplayer “will fit alongside” the single-player. As history has proved, multiplayer modes that have been added to a series known predominantly for its single-player have often failed. However, the multiplayer in Red Dead Redemption was pretty well-received so there’s a chance we can see something good from Rockstar.

Otherwise, I am so floored that Rockstar has been able to stay true to the fundamentals of what makes Max, Max. Rockstar even has the full blessings of Remedy, the original developers of the Max Payne series. Max Payne 3 is looking like one of the biggest games of 2012.