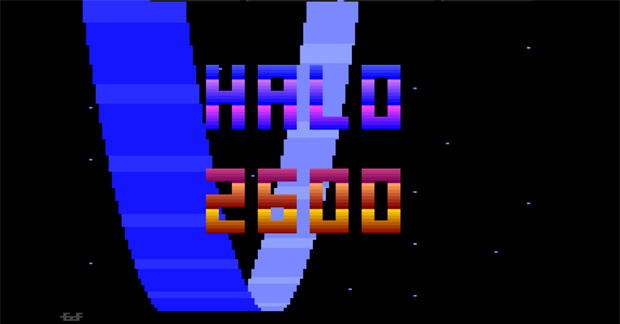 As I’ve probably said before, demakes are a pretty cool thing. The idea of playing Halo on an Atari 2600 won’t cause anybody to cancel their pre-order of Reach but it might give you a few minutes of amusement.

Halo 2600 is a surprisingly capable game, actually. You control Master Chief through four regions, gunning down Covenant forces while you search for the key to the next area. It’s not easy. A single shot will take you out, unless you have collected a shield which gives lets you take an extra shot before croaking.

When I started it up and saw the opening screen, I was really impressed. Then I started the game and it looked like I was about to play E.T. The Extra-Terrestrial except it controls competently. And then it utterly whooped my sorry ass.

The game is designed to run on original hardware, but there’s a flash emulated version you can check out. Halo 2600 was playable at this weekend’s Classic Gaming Expo and they even had 500 real cartridges on hand. I think I’m going to have to go a couple of more rounds before I give up. I hear there’s a huge boss at the end.