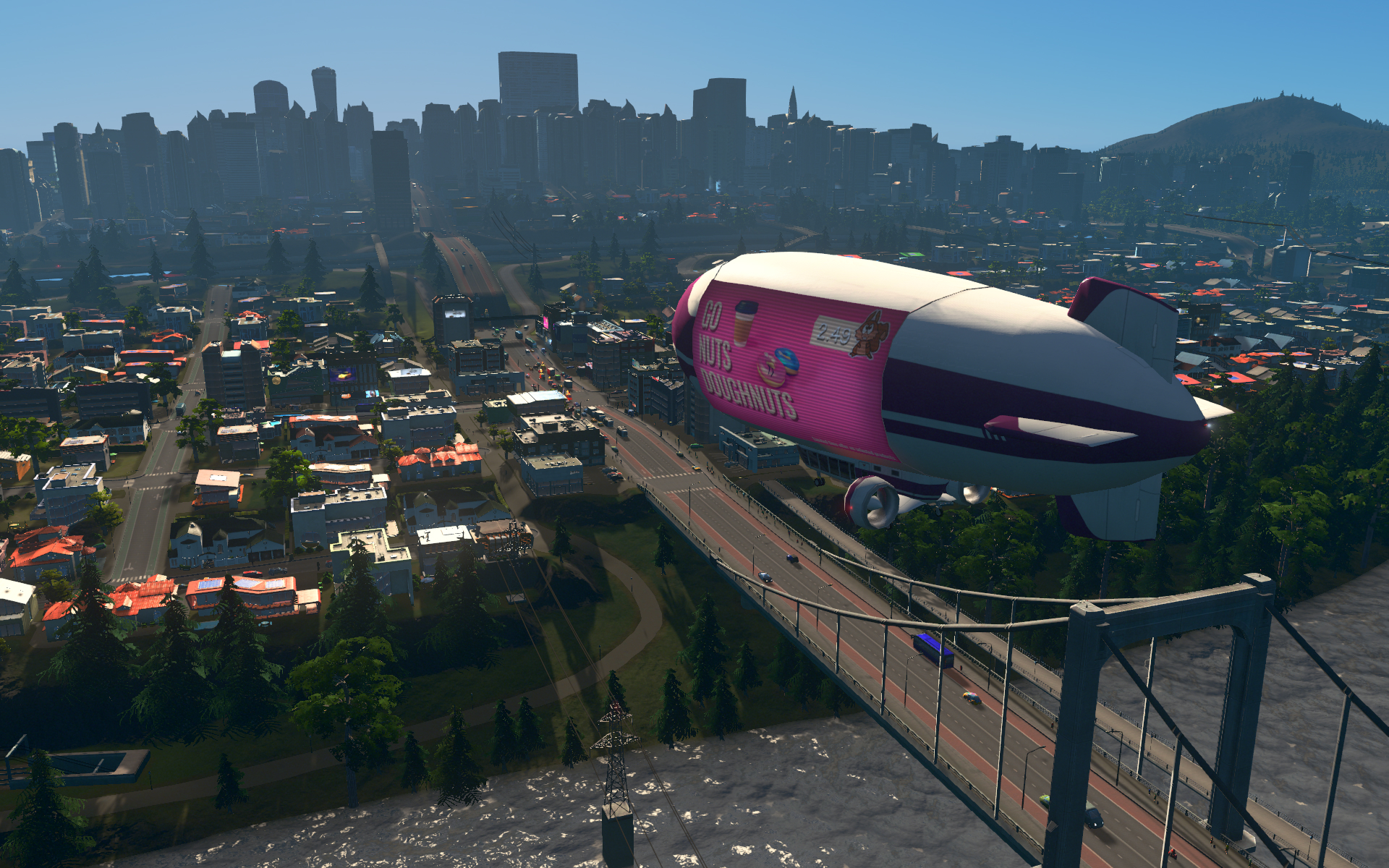 I know that’s not typically how you’d describe mass transit, at least in the US

I feel like Cities: Skylines has just the right amount of complexity. I recently went back to Sim City 2000 by comparison (which holds up!), and was taken aback by how much I had to divine (or remember) on my own. Not that it’s a bad thing, mind, just something modern audiences have to take into account.

Skylines instead seeks to gradually ease you in — it even limits the amount of land you can use at first. It has a calm feel to it, even before you head into the annals of its advanced machinations. Then again, every time I put a sewage disposal pipe upstream I scream out loud; there’s always enough to keep you on your toes. 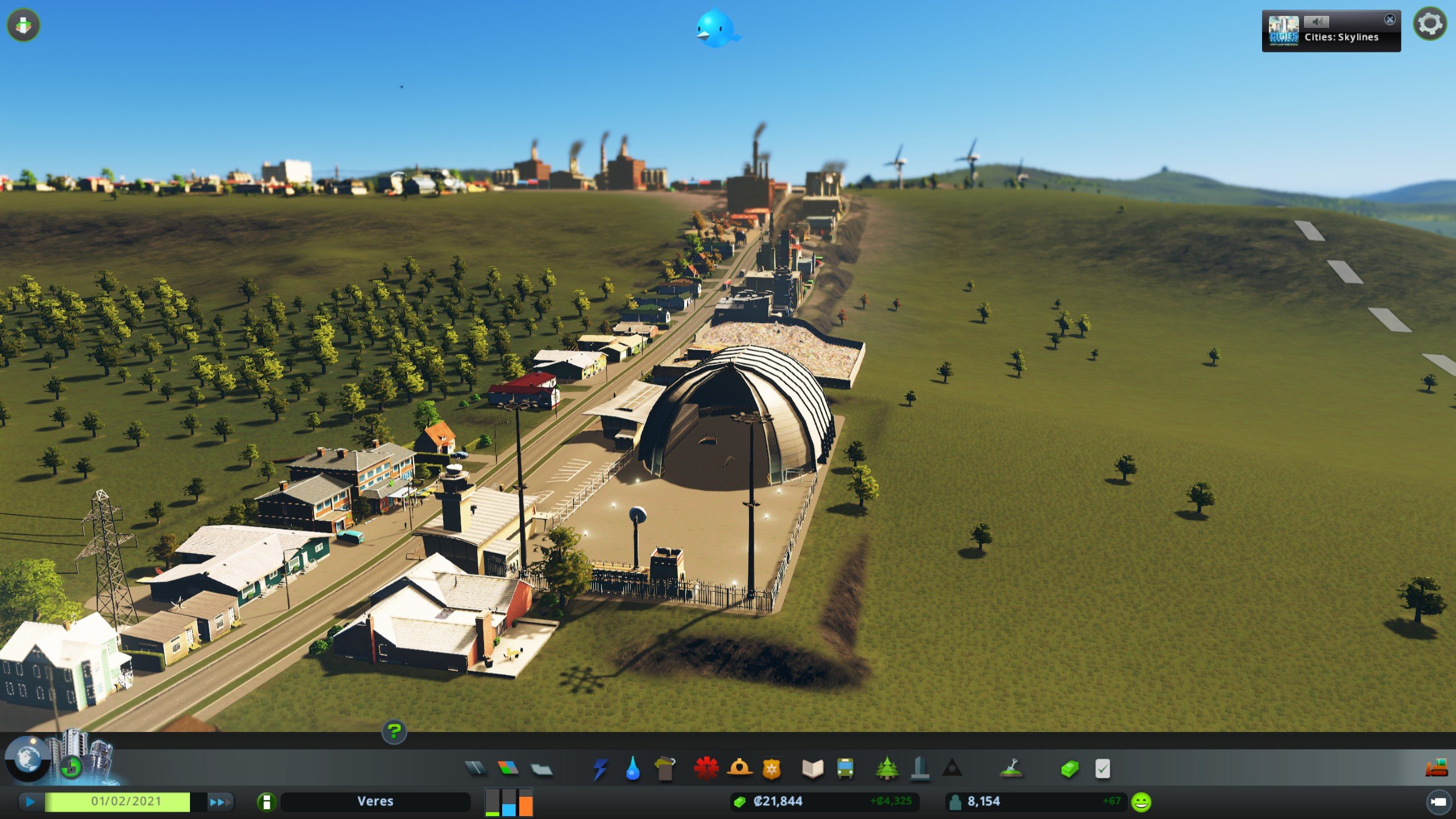 In addition to some new streamlined hubs and Chirpy (read: fake Twitter) hats, the main conceit of the $13 DLC is four modes of transport: cable cars, monorails, ferries, and blimps. Yes, blimps, which I feel most accurately captures the playful absurdity of the series.

These add-ons in general seem like such a small blip on the sprawling radar of Skylines, but they add enough where I don’t mind chucking a few coins at the game to keep growing my cities over time. Skylines as a whole really has been a slow, rewarding draw since its original PC release in 2015. Over time we’ve gotten After Dark (night options), Snowfall (winter), and Natural Disasters (duh), all of which slightly iterate on everything Cities has built. Remember when I said the game was easygoing? Well, transportation is the exception.

“If you build it they will come” doesn’t really apply here. You can’t just create a depot for any given mode of transport (say, a bus) and call it a day. No, you need to craft an intricate design that connects each hub with a “line,” which are often hard to spot on the map and can go wrong in so many ways. While building structures is as simple as placing them or bulldozing an offensive sight, transportation lines can be incredibly finicky. I didn’t have too much trouble with the cable car and monorail system, but ferries in particular (especially with narrow waterways) were difficult to get going, as were blimps in some cases (even though they’re flying above basically everything else, lines are constantly blocked by just about anything).

That’s par for the course, though — a barrier of entry when you start coasting into the mid game, when most of the Mass Transit content reveals itself. Over time if it takes pausing the game for an hour to figure out what lines to place where, or even tanking an entire city’s budget for the sake of experimentation, you’ll get there. (Eventually, you’ll realize that you need to build your city from the ground up with transportation in mind.) The little extras of Mass Transit help showcase how blimps are different from airplanes too, like educational advertisement placements and the like.

If you’re a journeyman mayor and have only dabbled in Cities: Skylines, just stick with the base game and its many free mods. The default transportation options even serve as a built-in barometer for how much abuse you’re willing to take before you pull the trigger on Mass Transit.