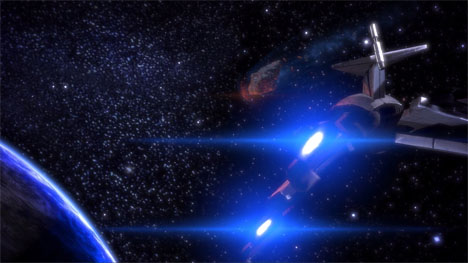 For those of you with short memories, Bring Down the Sky is the only downloable content released so far for Bioware’s Mass Effect. The DLC was originally released for the 360 version back in March for the price of 400 Microsoft points ($5).

PC owners might have needed to wait a few extra months to explore the new uncharted planet and play through the estimated 90 minutes of additional gameplay, but, as promised, won’t have to pay an extra cent for it. Just launch the game and you’ll be prompted to download the DLC along with patch 1.01, which makes a few minor fixes.

While the people that bought the DLC on the 360 might be feeling a bit grumpy that they had to pay for it, keep in mind that the PC version took longer to come out and is packing some terribly stupid DRM.

Fully optimized for the PC, “Bring Down the Sky” is the first in a series of planned downloadable content that will further expand the Mass Effect story and universe.  It includes a new uncharted world that introduces the deadly Batarian alien race, approximately 90 minutes of new gameplay and an original soundtrack.  Instructions on how to download and install the new content is available at https://masseffect.bioware.com/downloadablecontent/. “Bring Down the Sky” is currently available for international languages including English, Spanish, Italian and German, with additional language versions coming soon.

The storyline for the new content begins as Batarian extremists have hijacked a mobile asteroid station in the Asgard system, setting it on a collision course with the nearby colony world of Terra Nova.  Only Commander Shepard can save the millions of innocent civilians before the asteroid completes its deadly descent.

Originally released for the Xbox 360™ videogame and entertainment system, “Bring Down the Sky” has received critical acclaim as one of the “must have” downloadable expansion packs.  Mass Effect has also received critical acclaim throughout the world with more than 80 awards including Console Game of the Year and Role-Playing Game of the Year, with the PC version achieving several perfect 10/10 scores and an overall review average of over 90%2 (https://masseffect.bioware.com/previewsawards/).

PC gamers can download and install “Bring Down the Sky” by simply launching their registered copy of Mass Effect for the PC and following the instructions at the launch screen.  For more information about Mass Effect, please visit www.masseffect.com.