Angry mob goes after games when media misleads them

Yesterday, the mainstream media sunk to a new low in its rush to build the latest death circus. Following a horrific school shooting in a Connecticut kindergarten, news sources — chiefly CNN — jumped to dangerous speculation, with reporters going so far as to the publicize the killer’s Facebook account.

Unfortunately, it was the wrong Facebook account. Somewhere along the line, people had confused killer Adam Lanza with his brother Ryan, and so several social network profiles with the name of the wrong man were being shared and vilified online. Meanwhile, one of the Ryan Lanzas had to deal with losing his brother (and mother, who was teaching at the school), and found himself accused of murder in a public spectacle.

However, Ryan Lanza was not the only person wrongfully targeted by the media. After discovering his Facebook page, CNN’s audience noticed Ryan had “liked” Mass Effect, and that tenuous link was enough to kickstart a witch hunt. 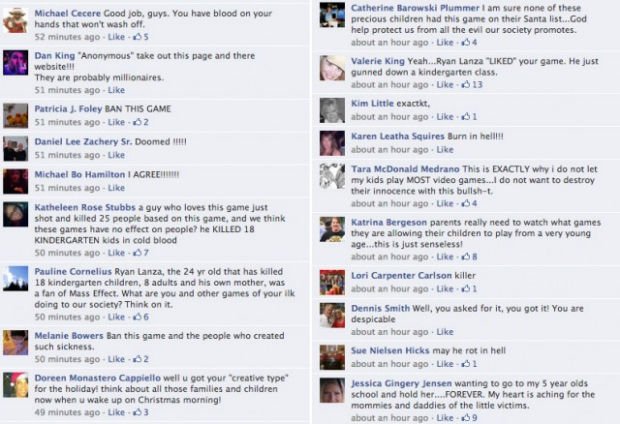 “Good job guys, you have blood on your hands that won’t wash off,” claimed one person. Others called for the game — one of the least controversial in terms of in-game violence — to be banned. One person even wanted the developers to be banned somehow, as punishment for, “Creating such sickness.”

It’s safe to assume none of these attackers actually know what the game is about, and didn’t bother finding out before they accused it of “promoting evil” and claimed the employees of BioWare need to, “Burn in Hell.” Long after it came to pass that news sources had screwed up and outed the wrong person, the moral guardians of Facebook continued their assault. Once they sniff blood, the truth no longer matters.

Right now, the Mass Effect page is flooded by support from fans who have done a good job of swallowing up misguided abuse with rationality and reason. Meanwhile, it seems the wolves have begun to slink off and find something else to lash out at.

Naturally, other news sources went for the blanket approach when finding anything other than the killer to blame for the killings. FOX News brought on alleged analyst Dr. Keith Ablow to claim reality TV and Facebook have reduced our ability to empathize, before saying, “I guess you could add gaming to that, computer games.”

All during this blame game, the hand-wringing television pundits fail to realize that, through all of this, THEY are the media that seem to inspire a lack of empathy while turning tragedy into a sideshow. THEY are the ones glorifying this type of violence by talking about it 24/7 with dramatic recreations, fevered dissemination of any minuscule bit of information, and an obsessive focus on the killer’s life.

When I think about being out of touch with reality, I don’t think of gamers, I think of the kind of person who’d tell a game developer to “Burn in Hell” because a wrongfully accused “gunman” happened to like a videogame on Facebook. When I think of a lack of empathy, I think of scores of imbeciles callously blaming innocent people for the deaths of children, just because they made a product that the assumed killer happened to enjoy at one time.

But the “news makers” who wrongfully accused somebody of an awful crime, and inspired their audiences to start harassing innocent people with an onslaught of truly vile insults, will continue to sit in their glass houses, gleefully throwing stones at everybody else while refusing to take a look at their own grimy role in the sleazy carnival of murder. After all, idiots who are quick to hold “the media” to account seem consistently unable to hold the media they consume to the same level of scrutiny, so the likes of FOX and CNN never have to feel responsible for the shit they perpetuate.

With that in mind … I guess we’ll do this again in a few months.