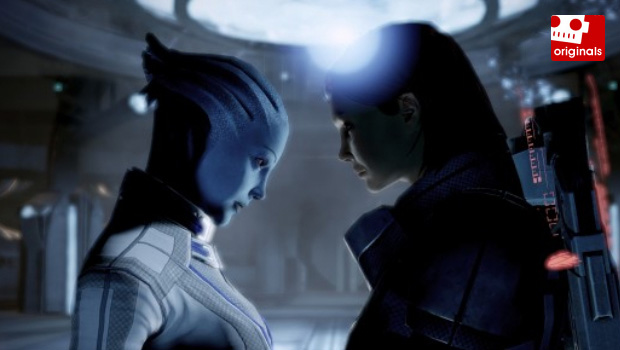 The Mass Effect fan seductively slid his disc into the tray, the warm humming of his computer implying an eagerness to receive. With hands almost trembling in anticipation, he booted up Origin, greeted with the familiar pop-up informing him that he needed to download an update. He smiled back at it, like an old friend returned from faraway travels.

He consumed a Diet Mr. Pibb while Origin updated itself — a stiff drink to calm his nerves, put fire in his belly. Tonight would be a great night. A passionate night. A night he’d remember in his wildest fantasies and relive in his most wondrous dreams.

Tonight was the night he would begin to play Mass Effect 3.

The title screen throbbed before him, glowing with energy that begged for sweet release. After drinking in the anticipation, delaying himself until he could stand the frustration no more, the Mass Effect fan clicked start. He was ready to create for himself a new Commander Shepard. One greater than ever before. You see, his old Shepard was trustworthy, reliable, and heroic, but he missed that special something. Something only Mass Effect 3 could provide. Gayness.

Wait … did he really just think that?

He could have sworn that’s not what he was thinking about before now, but the more he considered the erotic possibilities, the more he felt a stirring in his pants. Not an unusual occurrence, but there was something different about it this time. He wasn’t thinking about Olivia Munn or Jade Raymond or any other relatively attractive female vaguely associated with videogames. Not like usual. This time he was thinking about his toned, glistening avatar in the world of Mass Effect, sliding his large hands down the firm torso of another man. He had never felt this way before. Not until he had put Mass Effect 3 into his computer. It was frightening, and alien, but it felt so very right.

He slid his hand over the bulge in his Scooby Doo pajama leggings, the lucid dream exciting him more and more. He forced himself to put such thoughts to the back of his mind, however, because he had a game to play and a Shepard to create. Why was he making a new Shepard? Why was he spending so long creating his mouth? Those lips, they had to be just right. A good size, a perfect shape. Nice dick-sucking lips. What? No, that’s not what he meant. Yes it was.

The mental image of Shepard chowing down on some tumescent Turian tree-trunk was too much for him, and the Mass Effect fan had to surrender himself to his carnal urges. He fished his screaming phallus from within his leggings, letting it stand proud and tall in the cool spring air. It was red hot, aching with desire and desperate for release.

He closed his eyes and imagined all the other male Mass Effect fans in the world, doing the very same thing as him (which they were definitely doing). He imagined himself having sex with all of those Mass Effect fans, a room full of them, kissing and licking and suckling on each other like piglets at feeding time. A writhing mass of ponytails and ill-advised goatees, fifty Penn Jillettes squirming around with each other like greased worms in a bucket of man-sex. Pre-cum dribbled down his cherry-red helmet as he imagined such a decadent feast. What a dainty dish to set before the king. What a dainty dish of gay.

Such thoughts had never before caused this Mass Effect fan to tenderize his offal so fervently, and as his boner pulsed madly in hand, he knew he had no regrets. After all, he had no choice. Mass Effect 3 had some homosexual romance options in it, and that means every Mass Effect fan in the world was now 100% devoted to the cock. It would at least expand his dating pool, and hey, they’d all have something in common.

He briefly stopped to dribble a globule of lubricating saliva in his hand, that he may ease the physical distress his clenched fist had imposed upon his quivering donk. It was time for the vinegar strokes now, images of Shepard pounding Wrex in his bright green anus while a particularly rude Hanar wriggled a tentacle up his own chocolate gaper. He roared with passion as his squirting lugworm issued forth a volcanic outburst of liquid silk. This spunking volcano continued to spurt a thick jet of hot milkshake while the Mass Effect fan grit his teeth and wept at the thought of Commander Shepard, who was now canonically gay, beating off his squalid penis over the furry balls of Captain David Anderson. What a breathtaking sight that would be.

As human thought returned in waves to his brain and the Mass Effect fan wiped the swampy muck off his Jason Voorhees “Your Next” T-shirt, realization washed over him. What had he done? He wasn’t gay. Why did he just have a gay erection and do gay cumming all up himself? What had Mass Effect 3 done to him? He came to realize a dark truth — all the gayness in Mass Effect 3 was being forced into players’ minds, and they’d have to think about gay things all the time until it turned them all gay. Mass Effect fans around the world were clacking away on their swollen drillbits and having gay fantasies because Mass Effect 3 had turned them gay.

He could never play Mass Effect 3 now. Not knowing it would turn him gay for real if he played it too much and saw all the gay that was in it.

He would close down Origin. Shut off his computer. Go to bed and drive this horrible night from his mind.

At least … until the morning, when he woke up with a massive gay woody.