We got a little factsheet card in the mail today titled “Fun Facts About Mass Effect 2”. Surprisingly enough, it states that only 18% of all players chose a female Shepard while 82% played as a male Shepard. It didn’t say whether or not that includes multiple playthroughs.

But even if it does, that’s still a very small percentage of people who got to hear Jennifer Hale’s (best) version of Commander Shepard. I guess a lot of Mass Effect 2 players are male and don’t want to play as a woman. Or perhaps they never even bothered to do a second playthrough as a completely different character. How many of you chose a female redhead Renegade Shepard on their second run?

83% of players created their own face for Shepard. A whopping 65% of Mass Effect 2 players chose the Soldier class for our hero with the many favorite stores on the Citadel. I made some minor edits in the full list for those of you who are still waiting for the PS3 release.

Mass Effect producer Casey Hudson spoke with IGN in September and mentiond that most of the data is gathered from “events” (player choices and actions). Here is a list of statistics that were released back then. 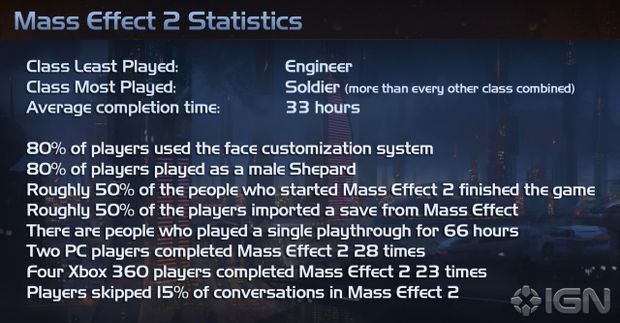 While some of this data will be used to change things like the difficulty — which might lead to slight changes for the upcoming PS3 release — other data may impact core design choices for Mass Effect 3. Here’s an idea: don’t make the skip conversation button the same button as the one you use to select the next conversation option. And if PS3 players get a slightly easier Horizon end-battle on Insanity, that probably wouldn’t be a bad thing either.

Anyone planning to finish Mass Effect 3 30 times just to be “that guy”?