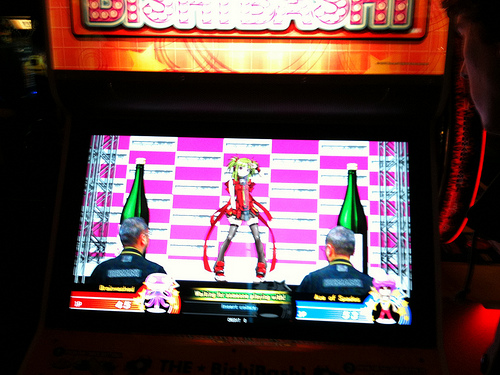 Or to photograph young cosplayers

Last night, I played some very strange Japanese arcade games, including one that really threw my understanding of games about defecating out the window called The Bishi Bashi.

The Bishi Bashi is a multiplayer competitive party game where three players each have four different coloured buttons with which to mash their way to success.

In one mini game each button controlled lifting a toilet lid, placing the toilet seat down, sitting on the toilet or flushing, with players having to successfully navigate a series of lavatories as fast as they can.

Another sees players mash buttons to photograph young Japanese girls in anime outfits while not accidentally photographing things like logs and statues.

It’s a weird ass video game, but it was a lot of fun. It’s well worth a look if you ever bump into the arcade cabinet on your travels.