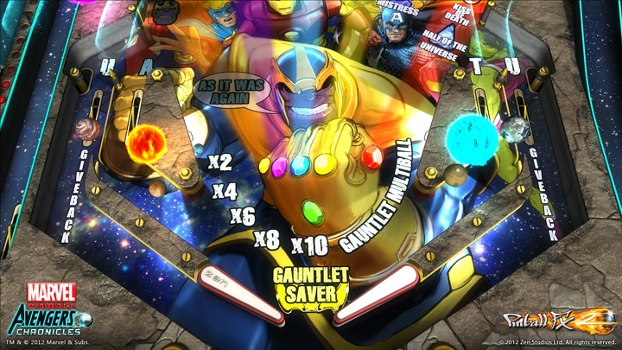 After being pushed back a tiny bit, the Avengers Chronicles expansion is finally headed to Marvel Pinball and Pinball FX2 on June 19th and 20th, respectively. As always, it’ll be 800 Microsoft points ($9.99). In it, you’ll find the “Avengers“, “Infinity Gauntlet”, “Fear Itself”, and “World War Hulk” tables. Above, you can watch the newly released trailer for “Infinity Gauntlet”, which truly is as fun to play as it looks.

It’s great to see Thanos getting so much attention lately, as he’s one of the coolest villains ever. His table will also have 139 lines of dialogue, so it will be the most story-driven pinball table Zen Studios has put together. I recently had the pleasure of checking out “Infinity Gauntlet” and “Fear Itself” at E3, so you can look forward to my impressions sometime tomorrow. Spoiler: they were amazing.