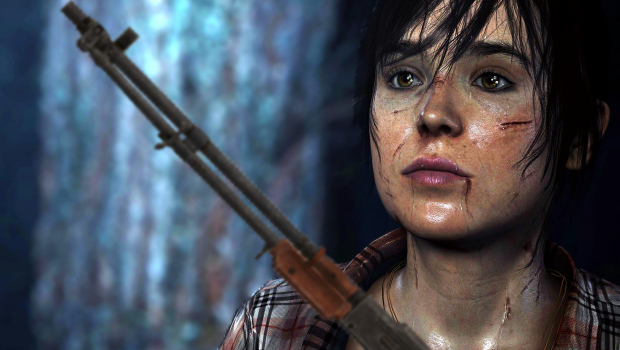 Beyond: Two Souls had to fight to stop its promo art being reduced to a character holding a gun like 90% of the rest of videogame advertising, Quantic Dream recently revealed. Had marketers had their way, Ellen Page would be clinging to some weaponry or other, probably looking off to the side with a full beard.

“We have to be very careful,” said studio CEO Guillaume de Fondaumière to GameSpot. “We’re working closely with the marketing folks at Sony to portray the game in the right light, to be able to talk to that diverse audience that we hope we will be able to reach with Beyond.

“Indeed, there is some action in Beyond. But if we, for instance, put a pack art that’s solely featuring action, first of all it’s not going to be truthful to what the game is and then, your wife for instance, is not going to feel attracted to this. She’ll say ‘ok, well that’s not unique, it’s one of your video games.'”

Not sure what my wife has to do with this. Especially since mine in particular is looking forward to BioShock Infinite despite its “frat boy” pandering cover art. Probably could have done without the generalization there, Guillaume, but let’s continue.

“So yes, we need to be careful and to make sure that whenever we communicate on this game, whenever we market it, that we manage to get across this variety in themes and this uniqueness that the project beholds.”

When asked specifically if Quantic had been asked to put a gun on the cover, the studio head said yes, and added it “categorically refused” to march in step with all the developers out there and bow to focus group demand.

“It’s kind of natural for agencies, you know, who are far away from the project, to pitch you different things. ‘It’s a video game? Okay, it needs to have a gun otherwise it’s not even a game.’ But our job, with David [Cage], is to make sure that everyone understands what is specific about this game and to make sure that we have the right pack shot, and the right imagery supporting the project, and the right image is being communicated to the public.”

Fair play to Quantic for sticking to its guns (har har), and choosing integrity over a disconnected marketing brain’s assumption. As I’ve said before, I’ll put quality over innovation, but I see no quality in the dreary cover art being used by some companies. I don’t even know how they work. I always thought good marketing was making your product stand out and catch eyes, not bleed into everything else so you resemble all the other stuff on the shelf.

When did that change? When did unremarkable become the new outstanding? Wait, I don’t think I want to know.