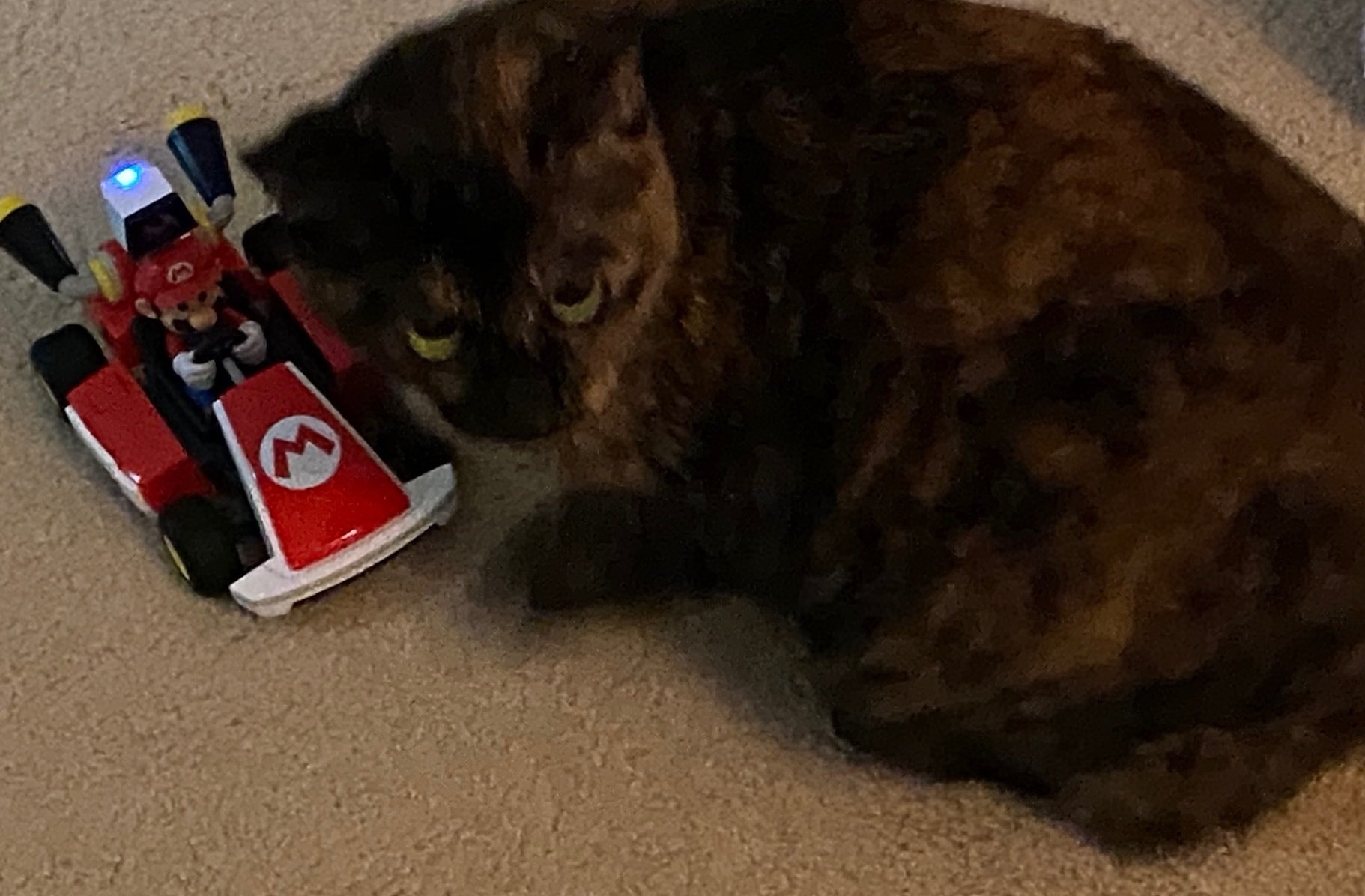 You also need the right house for it

Nintendo is the king when it comes to experimentation.

I would have really liked to have seen how wacky the Wii Vitality Sensor would have gotten, but in its stead, we’ve seen Labo and countless other flights of fancy. Mario Kart Live is the latest in a long line of toys from Nintendo, and like many others, you get out what you put into it. 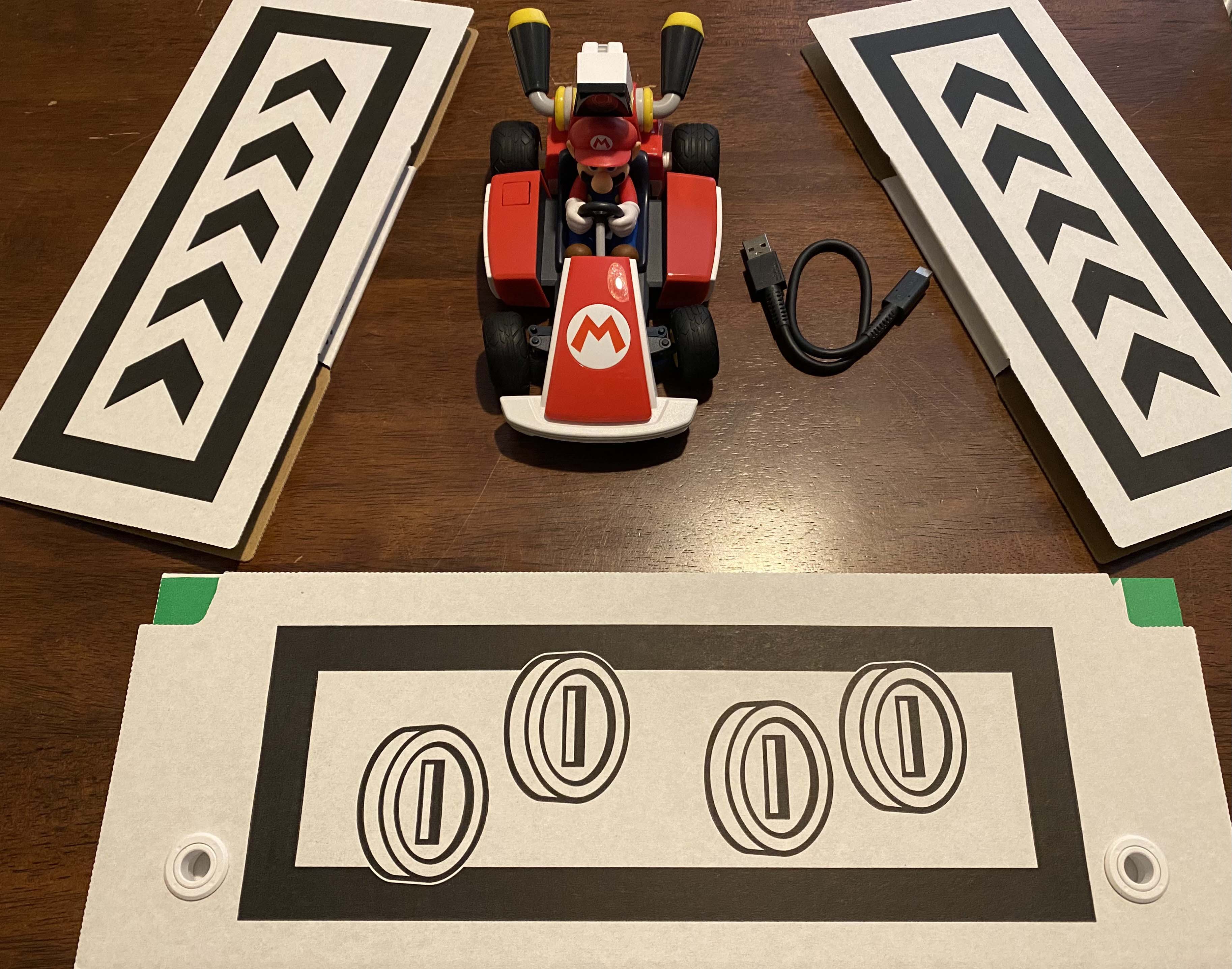 Let’s start with the setup, because this kind of gadget begs for more information on how it actually works. The box comes with: one racer with a camera strapped to the top (we got Mario, but there’s also Luigi at this time), four gates (to place around your house and create the track), two arrow signboards, and a USB charging cable for the car. The rest is done via the app that connects to the RC car, which requires a Nintendo Switch.

Speaking of, that process is very painless: head to the eShop and grab a 965MB program. Once you’re done, there’s a button on one of the sides of the car to sync the toy. Press it and point the toy’s camera at an on-screen QR code. In all, the pairing process took about five seconds, with a subsequent firmware update taking around one minute. The game thankfully knows if you have a USB cable attached to the kart — and warns you before you start it up (if for some reason your kid thought it would be funny to rip it out while charging).

As far as the track goes, “some assembly required” is even a bit erroneous for how easy it is. The four gates merely require two quick folds to have the arrows on the side serve as “feet” to hold them up, and the two directional signs are mostly for decoration and can be plopped on the ground willy-nilly. Although Nintendo suggests that you charge the kart first, you can go from unboxing to racing in-game in 15 minutes if you really want to. Here’s the thing though: you need the space for it.

Nintendo recommends a 10’x12′ area, with “room for scaling” depending on your desired kart speed. My house is built vertically, so I had to run my Mario Kart Live track from my living room through my kitchen and back around in a loop. That involves carpet and linoleum floors, with the racing transitions that entails. At first I was worried that the kart would get snagged or lag a little bit, but it was fine. 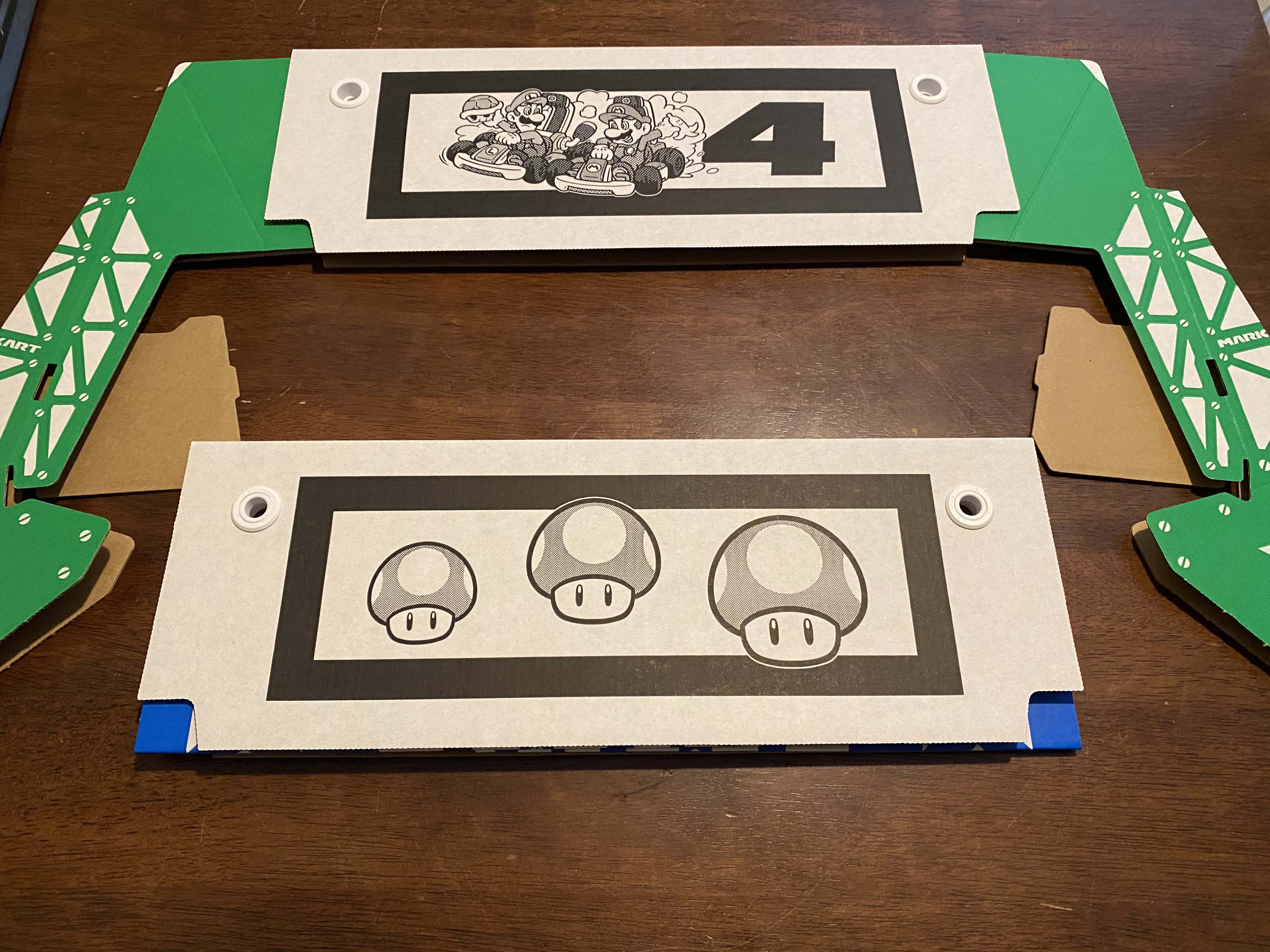 There’s a lot of wow factor involved in Mario Kart Live initially. It does in fact “just work,” and I had a blast driving it around the house while my cats tried to make heads or tails of what the hell this little device was. While training, you can also steer it wherever you want, so I tried to navigate the obstacle courses of various child toys (like my daughter’s small plastic slide) or my kitchen table. The kart is very sturdy and even after running it into a few walls for tests, it doesn’t look particularly scuffed or permanently damaged.

Reversing is also an option: just in case you get caught in a corner somewhere and don’t feel like getting up to move it manually. As a note, your AI opponents don’t have to obey the same laws of physics as you: so they can pass through objects if needed. I also really took pausing for granted: you can literally pause the game, go do something else, then come back to it with the AI picking back up where your kart stood.

It’s kind of an amazing bit of design from the folks over at Velan Studios. It’s a long ways out, but I’m envisioning a “land-to-air” kart-to-drone prototype in someone’s workshop right now, akin to Mario Kart 7-8‘s dynamic course style. There’s a lot of potential with this tech in the right hands.

So what do you actually do with it? Well, Mario Kart Live is sort of like its own Mario Kart sequel, complete with campaign cups, time trials, and multiplayer. There’s eight cups with three courses each, which is a ton of stuff to get through. The courses are themed, but there’s a limit. For instance the classic 8-bit Mario stage will adorn the gates with a retro aesthetic (and pipes that shoot out item blocks), with little digital Goomba enemies serving as hazards. Little details like extra clouds or atmospheric digital effects are also on-screen to help add to the mood.

But if you don’t change your course (or literally can’t because you’re in a small room), you’re still racing the same track over and over again with the same Bowser Jr. + Koopaling opponents. If you wanted, you could go all-out and print/3D-print little decorations to accentuate all of these themes, or craft crazy multi-level courses with ramps. I also envision a world in which you set the game up in a big room around you, with a raised seat in the middle to survey the action from on high. Like Labo, the sky is the limit for budding engineers.

But even with the default courses and menial changes, the newness of Home Circuit hasn’t worn off for me yet, in part because there are goals to work toward. As you progress you’ll unlock more cosmetic content, like different sound horns, outfits, and kart designs: all of which are represented on the Switch itself. There’s also a bunch of interesting Live touches, like GTA-style radio stations and a free explore mode that lets you just drive the kart around your house.

You can also turn on an assist mode that will rubber-band you back into the course (great for kids) and select from 50cc and 100cc right off the bat (150cc and 200cc are unlocked after you win a certain amount of times). There is support for multiplayer for up to four karts thus far, but I was not able to test it as we were only provided with one set.

The propensity for weeks of entertainment with Mario Kart Live: Home Circuit is there with the wealth of modes and the possibilities of decorating your own backgrounds for your tracks; but the threshold for fun really caps at your creativity level and the amount of space you have. Carefully consider your options before you dive in, but for those of you who are up to the challenge, it actually does work far better than you’d expect it to.

[These impressions are based on a retail build of the hardware provided by the manufacturer.]