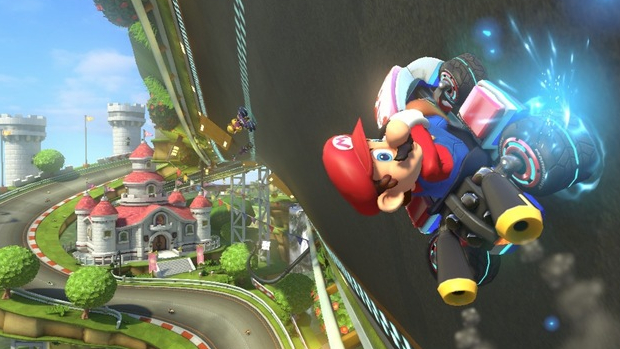 The ‘newest’ Mario Kart in years

There is a reason why they called Rambo IV “Rambo.” Once you getting past the third iteration of an idea, you want to try distract people from the fact that you’re still dancing to the same tune. That’s why I was shocked that Nintendo went with Mario Kart 7 for their last entry in the series. It looked tired.

I expected the same from Mario Kart 8, but I was wrong. It looks incredible, probably the most visually impressive first-party Wii U game I’ve played to date. The mechanics remain largely the same (you can use the GamePad to play with standard or “wheel”-style controls), but there were tons of new ideas on how to mess with the player’s perception orientation. Taking to the air, riding up walls, and even flipping completely upside-down were all common and sudden occurrences. I’ve been playing Mario Kart since the SNES original, but I was still totally thrown off my game.

It felt great to lose a game of Mario Kart for brand new reasons. For the first time in years, snaking had nothing to do with it. It was because they actually gave me some new problems to chew on. I haven’t been this interested in the series in a long time.