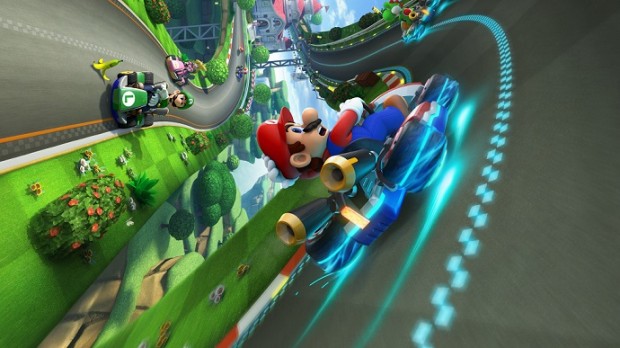 Nintendo President Satoru Iwata just dropped a load of information to reassure shareholders that he had a plan to save the company from ruin. A lot of his ideas are really interesting. One of them was not. Mario Kart 8 is being released in May, guys. Not a particularly mind-blowing reveal, but it’s important news all the same.

It makes sense that Nintendo would throw a little game talk into their otherwise OS/Smartphone/Infrastructure/Online Storefront focused presentation, as games is the one place where Nintendo always manages to pull in money. While the Wii U hasn’t sold a ton yet, it does have a pretty impressive attach rate, with Super Mario 3D World, Wii U Party, and Wind Waker HD all selling over a million units with less than a year on the market. That means that on average, about one of six Wii U owners bought those three titles. Nintendo is surely hoping to keep that software momentum going with Donkey Kong Country: Tropical Freeze in February and then Mario Kart 8 a few months later.

We already knew that Mario Kart 8 will get a simultaneous global release (like Pokemon X/Y), which will help consolidate marking power and make for a nice selling point right out of the game. Knowing that I can play against strangers in France on day one is pretty neat. Will the game go on to sell 24+ million units like Mario Kart Wii did? It will be fun to find out!