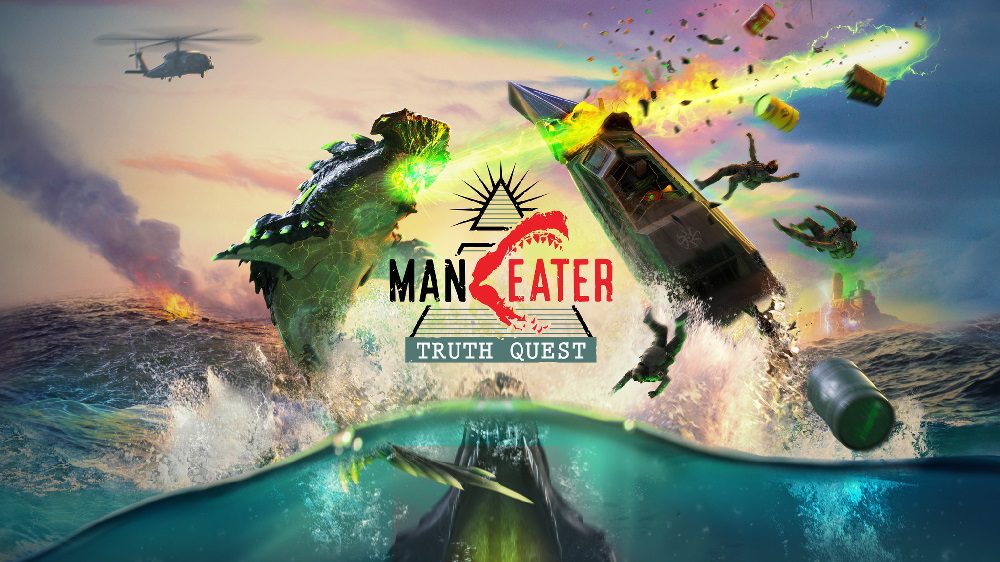 Have THEY gotten to you too?

Tripwire Interactive has released the first details for the previously announced DLC expansion to crazy, bloodthirsty “shaRkPG,” Manteater. Coming at some point this summer, Maneater: Truth Quest will return to the waves for more over-the-top boat-chomping action.

Following on from the events of the 2020 Shark-’em-up, Truth Quest will venture into the realm of internet conspiracies, as roving reporter Trip Westhaven investigates the growing rumors and theories surrounding the Naval Wildlife Organization. (4 life). Supported by an army of ViewTube followers – or “Questers” – Westhaven embarks upon a boat-rocking journey (literally) to uncover the clandestine government reports of  armored, toxic, and electrically powered sharks lurking in the deep blue.

“The team has been hard at work on Maneater: Truth Quest and we’re excited to announce the first details on the downloadable content that so many fans have been asking for,” said Tripwire creative director Sean McBride. “We’re aiming to give players more of what they loved from the original Maneater, with the ability to grow bigger, explore an entirely new region off the coast of Port Clovis, and evolve further tools of destruction […] we pick up where we left off and join Trip Westhaven and the shark’s journey down the rabbit hole of conspiracy and military cover-ups as you eat, explore and evolve through these uncharted waters.”

Maneater: Truth Quest will feature a brand new Evolution set, raising the XP cap to 40, increasing maximum shark size, and offering a selection of new organ evolutions – giving the array of evolved “hunt” creatures and the new “Uber” apex predator, you’re going to need them, chum. If this wasn’t hazardous enough, then new military adversaries will arrive to attack your shark pal by land, sea, and air, determined to fill you full of holes without the aid of any gas canisters.

Additionally, two new modes are incoming in the form of a ring-based Time Trial challenge and a tail-whipping new mini-game called “Failure to Communicate.” All of the above should provide hunters of the Blue Planet with more than enough content to ensure no Maneater fan goes hungry come the holiday-making season.

The Maneater: Truth Quest DLC will launch this summer on PlayStation, PC, and Xbox platforms, priced at $15.99. A Nintendo Switch port of Maneater will launch May 25.

…And if you’ve tricked me, Tripwire, then you’re gonna need a bigger boat.