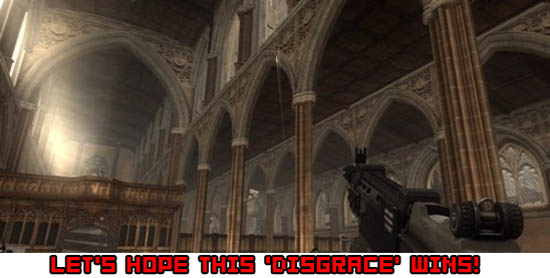 If you thought Manchester Cathedral was pissed off by the use of the likeness of their Cathedral in the PS3 title Resistance: Fall of Man, you should see them now.

Resistance: Fall of Man has just been nominated for a British Academy Video Games Award, a publicly-chosen award which is organised by the British Academy of Film and Television Arts (BAFTA). Needless to say, the Dean of Manchester Cathedral was not pleased:

“Sony has admitted that they did not have permission to film or use Manchester Cathedral in their computer game,” said Dean Very Rev Rogers Govender. “Bafta should not be seen condoning such behaviour unless they are saying it is acceptable for producers to walk into historic buildings and film interiors – ignoring contracts, rights and liability.”

So, I think it’s safe to say that the Dean won’t be attending the BAFTA awards on October 23rd in Battersea, London. I wonder what he’d say if Resistance: Fall of Man actually wins the award.