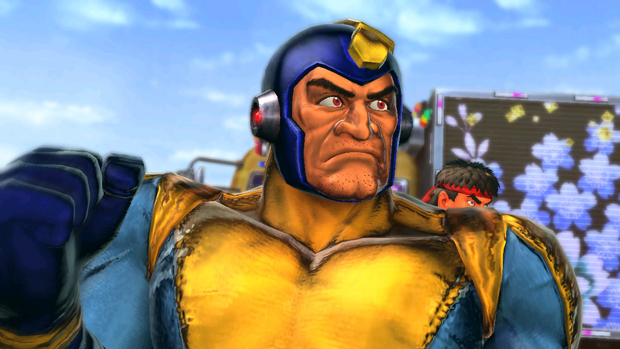 Previously hinted at company mascots Pac-Man and Mega Man have been confirmed as PS3/PSV exclusive characters for Street Fighter X Tekken, joining Cole from inFamous, and Sony Japan mascots Toro and Kuro. Unless the 360 version of the game gets an all star group like The Prince of all Cosmos, Linn Kurasawa, Alan Wake, and Ilo and Milo as its own exclusive characters, then there is no way it’s going to be able to compete (at least not for my money). Seeing as the game is coming out really soon, chances are slim that the 360 versions will be getting any exclusives at all. Microsoft has got to be feeling pretty hosed right about now!

Another group who’s already reportedly feeling hosed over this development is the Mega Man fan community. A lot of them are already saying that the fact that Capcom is choosing Bad Box Art Mega Man over all the other Mega Mans in the history of Mega Mans for this coveted position on SFxT‘s roster is a slap in the face, especially seeing as his in-game story closely matches the mythology of the Mega Man Legends universe.

As a 35 year old man and a Mega Man fan since 1988, I can say that I don’t feel that way at all. Not only do I think that Bad Box Art Mega Man fits with this particular game much better than any other incarnation of the character, I also see this move as a brilliant form of self-mockery on Capcom’s part. Read the rest of the post for an explanation of the logic on that.

Pac-Man and Mega Man are clearly meant to represent Namco and Capcom and their efforts to come together to create Street Fighter X Tekken. Pac-Man, riding a giant version of Tekken‘s Mokujin, represents Namco’s current philosophy towards working to simultaneously appeal to fans of their classic arcade days (with titles like Galaga Legions and Pac-Man Championship Edition DX) and fans of their more modern offerings (like Tekken and Katamari) at the same time.

Bad Box Art Mega Man does something else entirely. The character is old and out of shape. His costume has clearly taken a beating over the years. It shows multiple signs of damage (just look at that messed up helmet!). This is a man who has been through a lot. He’s seen better days. That’s not going to stop him though.

Despite being a bit long in the tooth, he’s still clearly trying to win over the beauty-and-youth obsessed Western market, just as he did on the box of the original Mega Man when it was first released in the United States. Man, he’s not going to have an easy time of that, is he? Not with that face. Not with those clothes.

He has all the makings of a failure: a fat, funny looking goofball desperately trying to look cool in the eyes of American teenagers, and failing hard at that goal. Yet, there is a fire in his eyes that makes him a charmer. He’s got the spirit and the determination that only comes from having true passion for your work. He may be making an ass of himself, but he’s a genuine ass, and that’s to be respected. How could he not be genuine? Nobody looks, acts, and dresses like that because they think it’s going to help them get ahead in life. If you look like Bad Box Art Mega Man, it’s because you want to look that way for you.

In short, Bad Box Art Mega Man is legit. People may make fun of him for not being as cool and sexy as Western super heroes and Japanese anime characters, but he isn’t going to let that stop him from giving it everything he’s got in his efforts to win both our hearts, and the Street Fighter X Tekken tournament.

If that’s not the best representation of modern day Capcom, I don’t know what is. Kudos to Capcom for making such an unexpected and interesting creative decision by using this version of Mega Man to represent them in what may be one of their biggest games of 2012. They could have gone the safe, predictable route and just included the standard “Mega Man” in this game, the one who is proven to be a crowd-pleaser, the one who has already appeared in multiple crossover titles. Instead, they went ahead and did something that not only has me wanting to shake their hands, but play the crap out of their game. Mega Man and Poison are definitely going to be my mains.